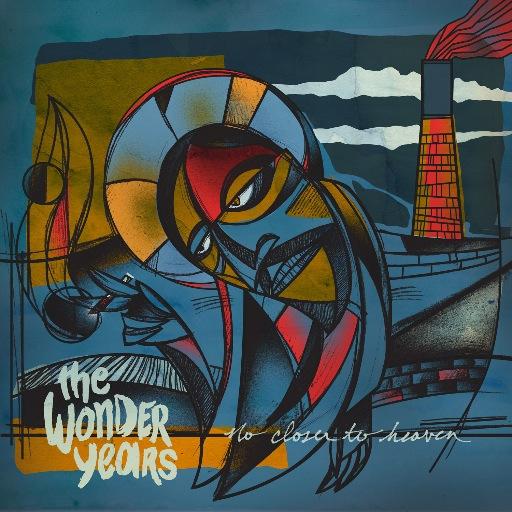 Pop punk has come a long way from the days of Blink-182 and Green Day. The genre has grown up with its fan base, from songs about taking a high school girlfriend to the mall, to more serious, introspective, sometimes political music. This forward momentum for the Frankenstein hybrid of pop and punk music has created an entirely new sound, thanks to trailblazers like The Wonder Years.

The Wonder Years have pushed the genre in the past, but their newest album “No Closer to Heaven” falls back into familiar territory. For some, this will be OK because part of the appeal of pop punk is its familiarity. For those less familiar with the genre, the songwriting will be the biggest draw.

In a way, pop punk is like high school. Aptly enough, like the fans they initially appealed too, pop punk is smoking outside during lunch period while the rest of music is hanging together in the cafeteria. Pop punk continues to assert, “This is not a phase, mom,” but phase or not, this isolation sometimes keeps the genre stagnant. This is part of the appeal for many, keeping pop punk an elite club that only the “cool kids” get to understand.

However conventional the box The Wonder Years exists in, historically the band has been the bridge that connects the exclusive pop punk genre with those outside of the pop punk club. They have come a long way from their 2007 “Get Stoked on It!” and grown into a more mature sound with their “Depression Trilogy,” culminating with their opus “The Greatest Generation.”

“The Greatest Generation” didn’t just push the boundaries of the sometimes idle genre. It completely redefined pop punk and showed how boundless it can be. This concept album, about the lost generation during WWII and (probably) loosely based on Ernest Hemingway’s “Farewell to Arms,” made allusions to modernist literature and poignantly addressed loneliness, love and failure. Told partly from the perspective of a WWII soldier and partly from the perspective of his grandson decades later who longs for relevance like his grandfather, this album utilized singer Dan “Soupy” Campbell’s screaming angst and longing lyrics in a unique, socially relevant way. This album juxtaposed the struggle of war-centric 1940s America with modern, suburban America.

The Wonder Years return with “No Closer to Heaven,” their fifth studio album, and like its predecessors, the visceral narrative is its greatest asset. This album deals with death, religion and loneliness, similar themes to the “Depression Trilogy.”

“A Song For Ernest Hemingway,” which reports on one of two plane crashes Hemingway experienced in his life, and the theme of alcoholism, are connected with a catchy chorus. Other literary allusions exist in “A Song For Patsy Cline,” with a William Faulkner reference.

Other songs stand out because of their emotional appeal. “Cigarettes & Saints” deals with the death of a friend, prescription drug abuse and the afterlife. The song is backed by snare roll reminiscent of a military funeral, which is a unique touch.

The songwriting is personal and introspective, like the audience stumbled upon Soupy’s diary. His vocal delivery, which ranges from screaming to singing with acoustic accompaniment, really drives the messages home and conveys the range of emotions being addressed on the album.

The biggest drawback of this album is the music that accompanies these heartfelt vocals.

According to the band’s Wikipedia page, “The band has been described as pop punk.” That’s it. That’s the entire description. The Wonder Years have so much more going for them than being just another “pop punk” band, yet this is the world they exist in, and musically, it stifles them.

This loyal stubbornness in pop punk is a detriment to the musical side of “No Closer to Heaven.” In many ways, it follows the formula that alienates the genre with the same guitar hook, yell, sing somberly, rinse and repeat formula. For better or worse, this is the genre these innovators exist in, and for some fans that’s okay. For me, I expected more after the inventive “The Greatest Generation.”

Despite what I have said, this album has garnered a 95 on Metacritic, one point lower than “The Greatest Generation.” After a bit of investigating, I found the only critics a part of the composite Metacritic score are pop punk music sites like Alternative Press and Absolute Punk. Other music journalists are in the cafeteria and pop punk is outside congratulating each other on another job well done while asking for a light.

This speaks to a larger issue in music journalism, but the pop punk nationalism specifically. If music sites continue to pat pop punk darlings on the back when they deliver the status-quo, the genre will never grow and will remain static. With a fan base this stubborn, any slight deviation from the formula is considered sacrilege, and that inhibits growth.

“No Closer to Heaven” is fan service, so if you are a fan, this album will be a warm blanket on a cold rainy day and it will be comfortable and familiar. What it lacks in musical variety, it makes up in songwriting, but that can only go so far. If you believe interesting music is unfamiliar, and something uncomfortable, skip this album and listen to “The Greatest Generation,” or Title Fight, Pity Sex, Modern Baseball or any of the pop punk bands that are challenging the genre and keeping it interesting.

Collegian Reviewer Danny Bishop can be reached at entertainment@collegian.com or on Twitter @dannydbishop.