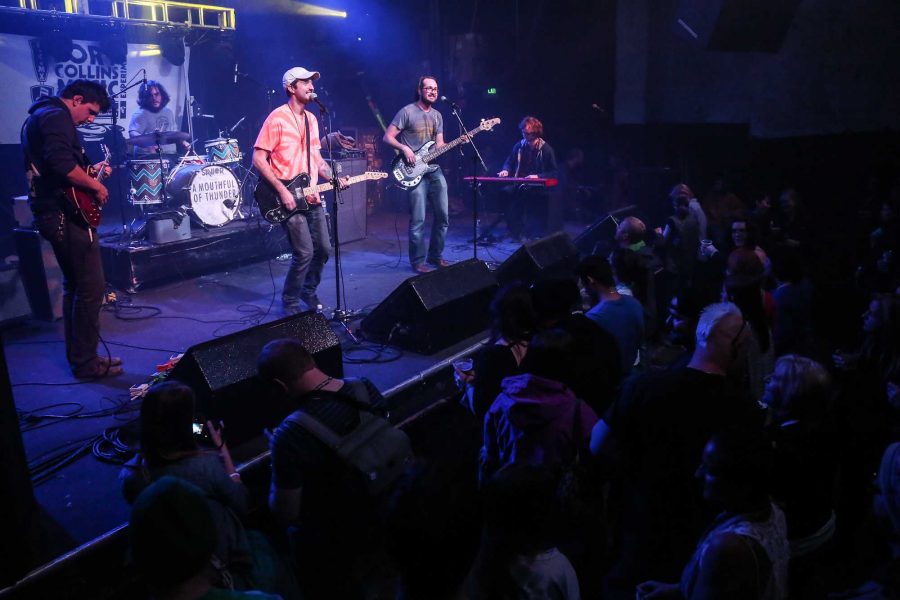 A Mouthful of Thunder performs their set at the Aggie Theatre on Friday night during the 5th annual Foco MX festival.

Colorado boasts an impressive music scene, home to bands including The Lumineers and The String Cheese Incident, and Fort Collins is no exception. Though Denver may be more well-known with legendary stages such as the Fillmore Auditorium and Dazzle Jazz, Fort Collins offers an equally impressive, albeit less eminent, slate of entertainment. The following are some of the top music venues in Fort Collins.


Aggie Theatre
Perhaps the most well-known stage locally, the Aggie Theatre consistently draws the most big-name artists of any venue in Fort Collins. The decidedly spacious theatre plays host to regional and national acts, most recently, Tyler the Creator. Though indie acts are not as common on this stage as much as at other local venues, the Aggie is the place to see big-time artists from a variety of genres in Fort Collins.
Hodi’s Half Note
Only a couple blocks down from the Aggie in the heart of downtown lies Hodi’s Half Note. While its crowd draw is similar to the Aggie’s, Hodi’s is better known for popular Colorado bands such as SHEL, Aspen Hourglass and regional acts. The venue also hosts a weekly entertainment series including EDM Tuesdays, stand-up comedy and funk jams. However, underclassmen beware: The venue charges more for patrons under 21.
Art Lab
Downtown gets a taste of the underground at Art Lab, a locally cooperative art space that boasts perhaps the most diverse music of any venue in town. The Art Lab, a remarkably accessible and low-cost venue, gives the musicians often overlooked by larger local venues a chance to share their sound with local audiences. On any given night, spectators can hear anything from black metal or folk-punk to electronic trance music. Perhaps best of all, most of the events at the Art Lab are free.
Avogadro’s Number
In addition to being one of the better options for cheap, good food downtown, Avogadro’s Number is also one of Fort Collins’ most unique music venues. In addition to its restaurant space, Avo’s boasts both an indoor stage and a spacious outdoor theatre for music from all corners of the country. Avo’s is best known for hosting acoustic acts and their weekly Bluegrass Open Jam series.


The University Center for the Arts
Some of the most unique music opportunities in town lay just a block outside of campus. The UCA is home to Colorado State University students studying performance arts, and hosts student musical and theatrical productions and an art gallery. In addition, the venue also draws world-class singers and instrumentalists to perform in their concert halls. Whether you’re a music nerd or just interested in hearing something new, the UCA is the place to be to see some of the best talent Fort Collins has to offer.

Though more renowned for its offering of indie movies, the Lyric Cinema Cafe is a popular downtown destination in Fort Collins. The venue periodically hosts music and performance acts, as well as community events. Most of the entertainment is hosted in the theatre, but one can also enjoy the occasional acoustic performance on the outdoor patio.
Mishawaka Ampitheatre
Twenty miles northwest of Fort Collins, nestled in the Poudre Canyon, lies the legendary Mishawaka Ampitheatre. The Mish, in addition to a restaurant and bar, features both an indoor lounge and a large outdoor theatre that holds over 700 people. The venue hosts a diverse mix of regional and national bands from an array of genres including rock, folk, reggae and jam bands.