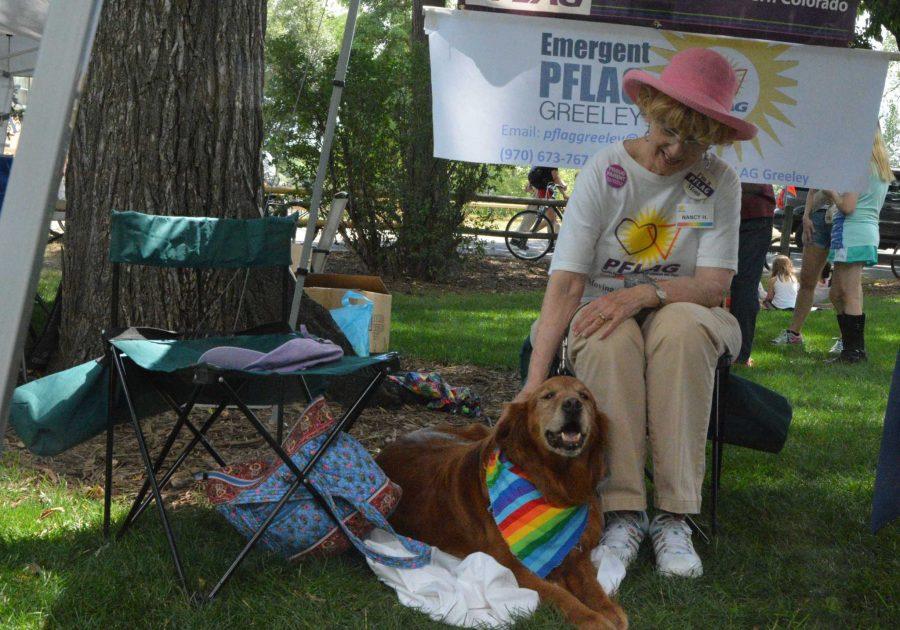 Sporting a button saying “I am a PFLAG Dad” on his tie dye shirt, John Case grilled for Northern Colorado Pride attendees Saturday.

Case sought out pride events and PFLAG (Parents, Families, Friends and Allies United with LGBTQ People) years ago after he son came out as gay and in a deep depression.

“That just said, ‘OK, his safety, his feeling of security and self-worth has to be remedied immediately,’” Case said.

That initial push led Case to PFLAG years ago and to City Park for Pride OUTside Saturday.

The event was one of many NoCo Pride events that took place over the weekend.

Kimberly Chambers, coordinator of NoCo Pride, said the weekend is one of the largest pride events Northern Colorado has ever seen.

“We’ve had versions of Fort Collins Pride in the past that (have) been put on by different organizations, but this is the first one that’s been this size and this intensity and offered this many different types of activities that Northern Colorado has ever seen,” she said.

Chambers said they aimed to offer various events over the weekend in an effort to find unity and support within the local community.

“Prior to Pride Weekend, we have zero supports in the community. If somebody is questioning their sexual preference or their gender identity, there (are) very few places for them to turn that’s local,” she said. “They end up looking toward Denver or toward Cheyenne, and we want to provide that.”

Alexa Tina, a Colorado State University senior majoring in communication with a minor in women’s studies, said most resources are found on campus.

“I’m a CSU student, so a lot of our resources are on campus. We go to the (GLBTQ2A) Resource Center (or) go to the WGAC resource center,” Tina said.

Tina said a partnership between CSU and the Fort Collins community would help bring more options to people within the community.

“I think if CSU and Fort Collins could kind of coordinate with the LGBT community, that would be great.”

“What (events like this) allow for is a chance to network with other people doing very similar work, so I think there are a lot of good resources out there, and days like today are a really good way for us to learn about what others are doing in the community,” Boesenecker said.

Boesenecker said he hoped to let people know that there are open and affirming churches. Mustard Seed Church has performed weddings of all kinds since before the Supreme Court ruling passed in favor of marriage equality.

Chambers said the ruling gave many more of a reason to jubilate.

“I think that it gives people an additional reason to celebrate,” Chambers said. “Getting the first step to a more equal community or country is really important.”

However, Chambers said there is still work to be done in the name of equality.

“I know a lot of people in our community are empowered by the fact that marriage equality passed in the Supreme Court, but they also identify that there’s a lot of work that still needs to be done,” Chambers said.

PFLAG volunteer Paul Hesson listed job discrimination and transgender identification as a couple of the issues that need to be addressed, although Colorado does have certain protections that other states do not.

Each spoke about issues such as hate crimes, adoption protection, job discrimination and transgender health.

Case said people must look beyond the LGBTQ community to reach equality.

“The other thing that we’re trying to do here today is announce the other organization that’s going to say that equality is not just LGBT,” Case said. “Race has not arrived. Women’s rights has not arrived. And we need to get there.”

Collegian A&E Editor Cassie Maack can be reached at entertainment@collegian.com or on Twitter @maackcl.