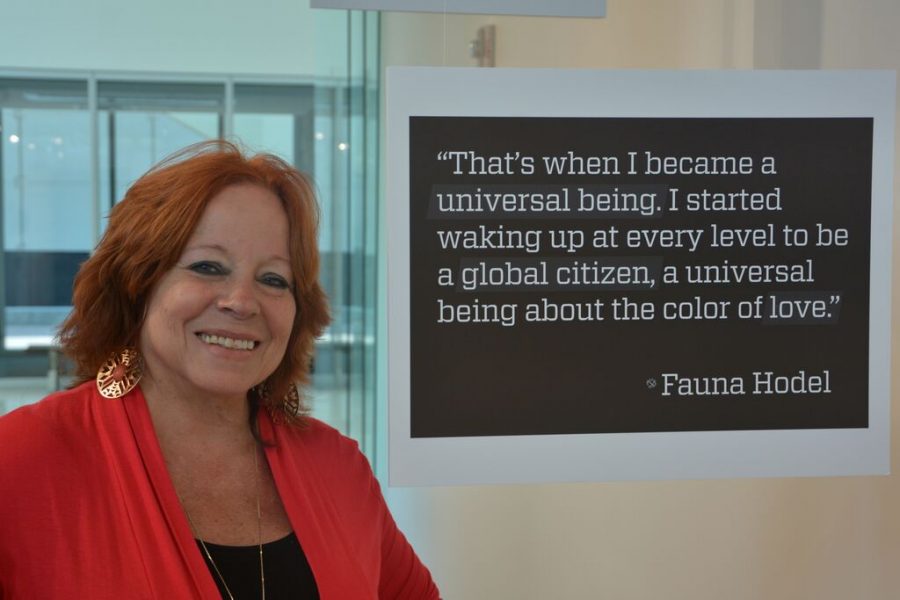 Fauna Hodel, an ethnically Caucasian woman, believed she was black until her early 20s.

Hodel was adopted by a young African-American woman shortly after birth in 1950, and she believed she was mixed race into her adulthood.

Her story is reminiscent of Rachel Dolezal, the former leader of the Spokane, Washington, chapter of the NAACP, who identified as black even after her parents came out saying she was a white woman.

Hodel’s life story is not one of cultural appropriation, but rather it is one of struggle and triumph as an outsider in her own adoptive family. Her new exhibit in the Lory Student Center’s Curfman Gallery, “Beyond Color: A Life Journey Using Art to Transcend Culture,” seeks to bring a cross-cultural message to Colorado State University students through the story of her life and through her art.

“People are described based on the color of their skin,” Hodel said. “For me, ‘Beyond Color’ is about description. Why would another human decide to hate you, or like you, because of the color of your skin? I want to step into a world beyond color – where we are interacting with people as beings, where we all become a part of human K-I-N-D.”

Hodel’s biological mother insisted that she be adopted by a black family because she thought they were more friendly and loving than the white people of the pre-civil rights era. Her biological mother was daughter to George Hodel, a prominent Hollywood doctor who was the prime suspect in the Black Dahlia murder case in 1947. Her adoptive mother was working as a bathroom attendant in a Reno casino when she was offered a $50 tip to take the baby.

The CULTURS club at CSU collaborated with Hodel to create a “multimedia journey through the maze of a life with unimaginable twists and turns.” The club aims to promote the importance of learning about culture and being globally minded, according to the CULTURS RamLink website.

“It’s a pretty interesting investigation of something that happens more than we realize,” said Doug Sink, project manager for the Curfman Gallery. “What appealed to us was how her book, her movie and her daughter’s fashion design are bringing about diversity and culture to the forefront of the experience.”

“It’s really interesting because it seems like Fauna Hodel had a dark life and a dark history, but she still managed to make something beautiful out of it,” Champ said.

The “Beyond Color” exhibit will be open to the public from 12-5 p.m. every weekday in the Curfman Gallery in the LSC until Sept. 4. Hodel will host a reception and signing of her book, “One Day She’ll Darken,” at the exhibit from 5-7 p.m. Sept. 1.

Collegian Reporter Erik Petrovich can be reached at entertainment@collegian.com and on Twitter @EAPetrovich.