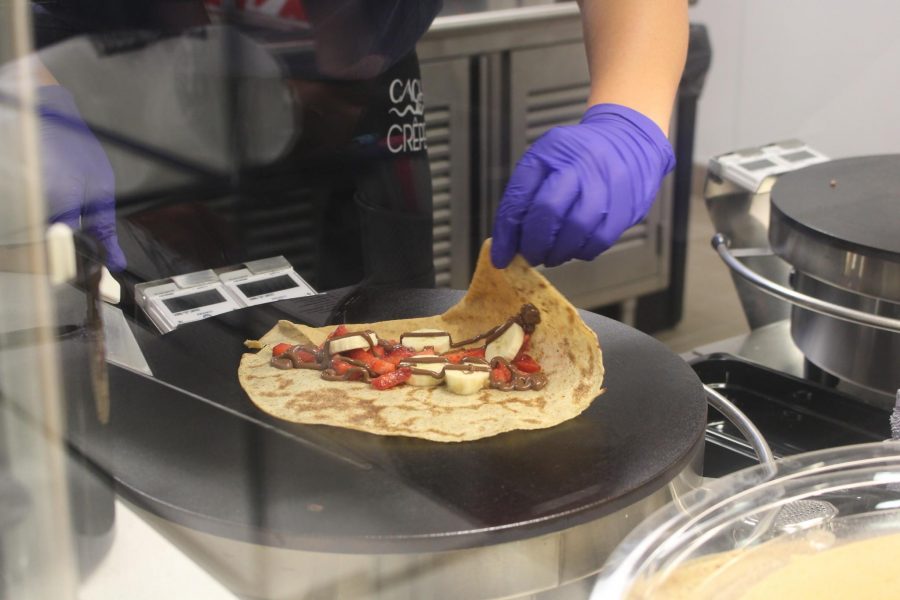 Julio Becerril
My stomach was left feeling empty after my lunch Monday and so was my wallet.

The newly opened Cache La Crepes in the basement of the Lory Student Center began serving up new food options for students Monday, and as a lover of food, I had to try it for myself.

The new food location is next door to the Ramskeller, an already popular spot for students. The look of the place itself is a little bland, but its final design is not finished yet.

I went with one of the lunch options: the pesto chicken crepe. For the price, it was a bit underwhelming. The pesto was savory and went great with the red peppers and chicken, but I just did not feel satisfied. It would have been nice to have the actual crepe batter poured and fried right in front of my eyes. According to the menu, I was looking at a 230 calorie meal. That is definitely a healthier option than my usual Taco Bell lunch.

For the smoothie, I went with the peanut butter protein shake which included peanut butter, bananas, chocolate and fat free Greek yogurt. To top it off, my smoothie had 25 grams of Met RR© protein.

There is a smoothie with 39 grams of protein and the option to add more. That could come in handy for students coming to the LSC from the Rec Center after a workout. The smoothie itself was really delicious and more filling than the crepe. I should have gone with a larger sized smoothie, which may have calmed my appetite. The price for the smoothie I bought seemed fair, but a dollar less would be great.

Then again I am a broke college student, so I think everything is expensive.

The early opening hour is great for students who are looking for breakfast options on campus. Cache Le Crepes also serves coffee, but if you prefer the usual Starbucks, you’re in luck.

Geoffrey Valdez, assistant director for Lory Dining Services, said a Starbucks will be opening by the Lory Theatre.

“We’re actually pretty close to opening up intermissions on level 200 on the south end, and that’s going to be a proudly serving Starbucks location,” Valdez said.

Price aside, Cache La Crepes is one of the healthiest food options available in the Lory Student Center. It is nice change to the usual delicious greasiness that is Panda Express and Carl’s Jr., but I do not see myself coming back very often.

Now that Cache La Crepes is open, the surrounding area in the LSC basement will certainly become a popular hangout spot, especially since the video game check-out is close by, along with the Ramskeller.

I can picture students sipping on their smoothies and battling it out in a game of Mario Kart now. If you have some extra cash to spend, it is worth traveling down to the LSC basement to give Cache La Crepes a try.

Collegian Reporter Julio Becerril can be reached at entertainment@collegian.com or on Twitter @jb050705.