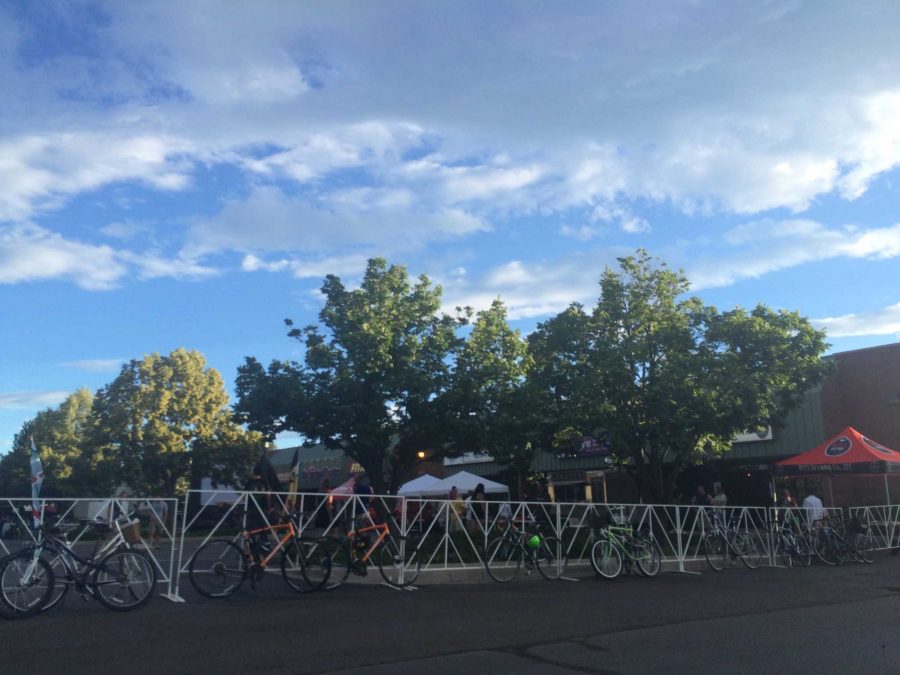 Over 100 attendees made an appearance Saturday night to a bike-in movie event hosted by local businesses.

“Pee-wee’s Big Adventure,” a classic American comedy released in 1985, revolves around an eccentric young man who stops at nothing to reclaim his stolen bicycle. This timeless classic was chosen as the motion picture to be featured at the bike-in movie hosted by the 1933 Brewing Company, Life of the Party and Recycled Cycles, all located at a strip mall on South Mason street.

The bike-in movie was an idea that the business owners of all three stores developed when they considered hosting an event that would be fun and would also get people outdoors, Katie said.

Chris Corman, co-owner of Life of the Party, said the diversity of the businesses would benefit the area.

“We have a lot of unique businesses in this strip mall,” Chris said. “They’re fun and quirky, and I think we have a lot to offer.”

Zach Wilson, an employee of the 1933 Brewing Company, said he and the other business owners all have a passion for cycling, which is one of the primary reasons they chose an event that involved that activity.

David Hudson, store owner of Recycled Cycles, attributed much of the event’s success to their marketing teams that aided in promoting the bike-in movie using several avenues of communication. Hudson said the work put in by the businesses marketing teams was exceptional.

“Our marketing teams did a really good job getting the word out about tonight,” said Hudson. “They used our websites and social media.”

Despite the predictions of inclement weather, there was still a substantial crowd that arrived to participate in the activities. Along with the movie, there were an assortment of yard games such as corn-hole to be played, and food and beverages provided by the brewery for the guests.

“There were over 100 people who came by,” Katie said. “We were definitely pleased with the turnout.”

Chris and Katie Corman considered their event to be a success and said they hope to plan future events. Katie said her and her husband have already been approached and asked about making the bike-in an annual event.

Brett Miller, a Fort Collins resident, attended the festivities with several of his friends for a fun-filled evening.

“This is great,” Miller said. “We get to bike-in, play some games and watch a movie with friends. It’s a really enjoyable time.”

Collegian Reporter Aaron Worley can be reached at entertainment@collegian.com or on Twitter @AaronJeffreyWo1.