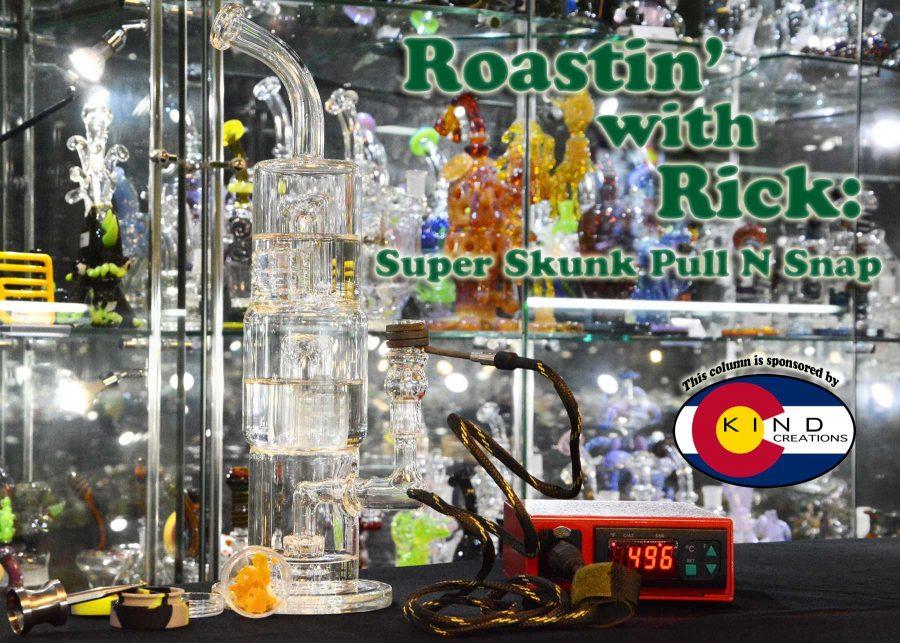 Seeing that I hadn’t reviewed a concentrate since the Bruce Banner wax, I thought it was about time to try out another wax or hash. This time, I wanted something indica-dominant.

Again, I went into Organic Alternatives, located at 346 E. Mountain Ave., and unlike my last visit, I didn’t stray from the objective. I came across Organic Alternatives’ own Super Skunk Pull N Snap wax. The flower is an indica-dominant hybrid born from cross-breeding Skunk No. 1 and Afghani indica.

With its THC levels coming in at 65.95 percent, the gram cost a total of $31.70. It had a perfectly gold tinge to it and a smooth texture with tiny craters here and there.

Once again I was able to review this marijuana product inside the store of my sponsor, Kind Creations, at 828 S. College Ave.

Once I got to Kind Creations and had a moment to observe the wax, I noticed how unexplainably pungent this wax was. After opening the container, my entire surroundings smelt of this extremely powerful, sweet and skunky aroma. There were slight elements of lemon, but it was overpowered by the enticingly delicious skunky smell. It seems odd to be describing a “skunky” smell as something delicious, but the skunk-like fragrance from marijuana or marijuana products is lovely, sweet and quite pleasant — the full scent is magnificently delightful with only a small, skunk-like redolence.

The wax was very malleable and broke apart into the most ideal sized pieces for dabbing without much pressure. The only negative aspect of the wax’s texture was that it wasn’t very sticky, and I often had a hard time picking it up with the dabber. But then again, had I been using a dabber that had already been in previous use, then I wouldn’t have had much trouble with it at all.

For this review, I was dabbing the Super Skunk Pull N Snap wax out of Kind Creations’ Triple Stack Oil Drum rig using a Santa Cruz Shredder titanium carb cap and an aluminum D-Nail 1.2. Let me tell you, this is one heck of a rig once it’s all set up and ready to go. The Triple Stack Oil Drum minimizes the irritation caused by dabbing, and the D-Nail 1.2 keeps the nail hot at all times while its turned on, which saves time and also allows for dabs to be completely vaporized to their fullest extent instantly. I set the D-Nail to 630 degrees, picked up a good-sized dab and slowly slipped the wax into the crevices of the nail.

The flavor from this wax is incredibly sweet with only small hints of the skunky aroma evident in the smell. The flavor was well defined and stayed in the mouth for quite awhile after taking the dab. Because the dabs weren’t too harsh on my throat, I was able to truly enjoy the whole flavor profile without experiencing an intense coughing spree after inhaling the vapor. I loved the flavor of this wax — it was more like a delectable little treat than an intoxicating vapor.

Usually, I’m not the biggest indica fan, and I’ve voiced that in a couple of other reviews before. But I have to say that this indica-dominant marijuana product is my favorite of its kind so far. The high was perfectly balanced between mind and body effects, which caught me completely by surprise.

My anxiety melted away as my body slipped into an ocean of relaxation with subtle, gentle waves of pure euphoria and happiness drifting through me. My muscles seemed to become looser and less tense while my mind remained cool, calm and collected. Although I felt slightly tired during the time period in which the effects were evident — about three and a half to four and a half hours — I felt perfectly fine staying awake. But to be honest, once I did lay my head on my pillow, I immediately fell into an amazing and much needed deep sleep.

Once again, for the second week in a row I have had the pleasure of reviewing a truly delightful and well-balanced marijuana product. Overall, Organic Alternatives’ Super Skunk Pull N Snap wax receives and rightfully deserves nine out of 10 leaves with immaculate flare.

Collegian Senior Reporter Rick Cookson can be reached at entertainment@collegian.com or on Twitter @RickCookson1.