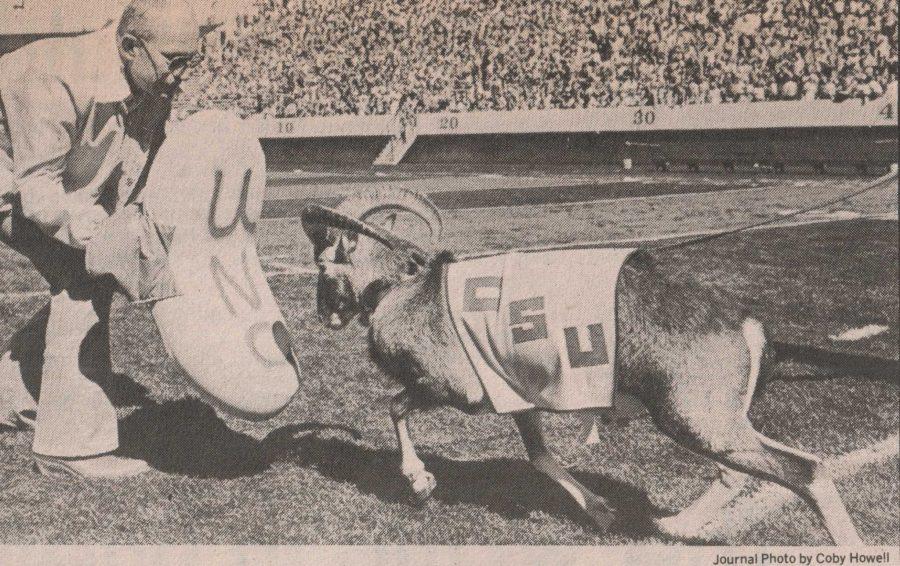 We identify ourselves as Colorado State University students through the traditions we follow. But traditions are not everlasting, and CSU traditions are not immune to the rule. Here are some of CSU’s lost, forgotten and almost-were traditions identified by Gordon “Hap” Hazard at the Archives and Special Collections desk of Morgan Library.

Class ranking defined one’s University experiences in the early 1900s. If a freshman strolling the Oval failed to recite the fight song or the football team’s next opponent to a confronting senior, they were dragged and “tubbed” head first into the leaky, mosquito-infected pond on campus. The pond was eventually removed, but horse troughs were still common and “tubbing” continued. We can be grateful this tradition sank in the 1930s when Dean Floyd Cross, who likely participated as a student, found its immaturity to be less than charming.

Knights of blue and gold

Before CSU had school colors, they had a football team. That team was on its way to play an academy in Longmont, but they did not have uniforms. They stopped at a drugstore and purchased identifiers: green and orange ribbons, thus conceiving our University’s colors. In the early 1900s, green was a hard dye to manufacture. It was also toxic and not ideal for a sport that exposes open wounds. There was a push in 1910 to change the color to blue, but it never stuck. As early as 1929, gold began to replace orange, perceived as out-of-fashion, on the home uniforms. That is how CSU almost became the knights of blue and gold.

Who is Sam the ram?

CSU football had a second mascot for a few seasons. From 1977 to 1979, CSU employee Gerald Rice’s Coriscan sheep, Sam, would rile the home crowd by butting his head against a blocking dummy, which undoubtedly made Cam very jealous.

CSU hosts Cans Around the Oval every year. But you probably never heard of Bottles around Hughes. It’s a lost tradition (of sorts) that pays homage to CSU’s historically disastrous football teams. So much alcohol was consumed prior to home games that bottles of hard liquor and beer were placed end-zone-to-end-zone around the walls of Hughes Stadium. When the season Hughes opened in 1968, CSU didn’t win a single game. Hughes Stadium began selling beer in 1976 to curb the rampant alcohol consumption. Let’s hope the new on-campus stadium brings about the kind of tradition we do not need to drink to forget.

In the 1920s, areas around Northern Colorado experienced a small oil boom. There was a push to change the name “Aggies” to “Oilers,” a name that today would be ironic considering CSU’s commitment to sustainability.

The ram became the official mascot of CSU in 1945, but it was not always Cam. The first ram was a fellow named Buck, gifted in 1946 by the “Senators,” a men’s pep club on campus. In 1948, the Collegian announced the winner of a ballot vote to officially name the mascot … “Meathead.” Graciously, it is a name the Collegian did not adopt despite its democratically elected rite. In 1954, a naming contest was held by the Collegian, birthing our beloved Cam (for Colorado Agriculture and Mining). From 1945 all the way through the late 1960s, CSU was the “Aggie Rams,” a tradition resurrected today during orange-out games.

The University went through four mascots spanning three species prior to World War II, including a human boy. In 1909, Peanuts the Bulldog was our mascot until shipped with CSU’s National Guard unit, Battery A, to the East Coast. Peanuts was shipped home when Battery A joined the fighting in World War I in France, but was fatally poisoned weeks later. In 1919, a live sweater-wearing black bear cub named Teddy was adopted for a season, but didn’t reappear in 1920. For roughly a decade, Billy Hughes, son of coach Harry Hughes, posed as the University mascot in team photographs. In 1936, Olympic gold-medalist and CSU alum Glenn Morris donated a bulldog similar to Peanuts named Gallant Defender. Any hopes of the bulldog being the official mascot went out with the football hiatus during World War II.

Before the French 75 mm cannon “Comatose” was firing celebratory blanks at Hughes Stadium (causing many a dropped hot dog), football victories were celebrated by ringing the bell on top of Old Main – a building on campus that burned to the ground in 1970. The freshmen rang the bell a bit too enthusiastically and it cracked in 1919. It was stolen some years later. 1920 ushered in the tradition of “Comatose” opening and closing home football games. Today, the closest thing to the Old Main bell is the jingling of keys during kickoffs.

One of CSU’s oldest running traditions was its yearbook, the Silver Spruce. Named after a tree native to Colorado, the Silver Spruce was staffed by the junior classes and ran from 1895 until it got the axe in 2003. — The Collegian is a CSU tradition still running, along with the painting of the A, firing of the cannon and the Bronze Boot trophy awarded at the annual Border Wars football game. Yet the oldest according Hazard is waiting for a train to pass through campus. Collegian Reporter Jake Schwebach can be reached at entertainment@collegian.com or on Twitter @jschway.