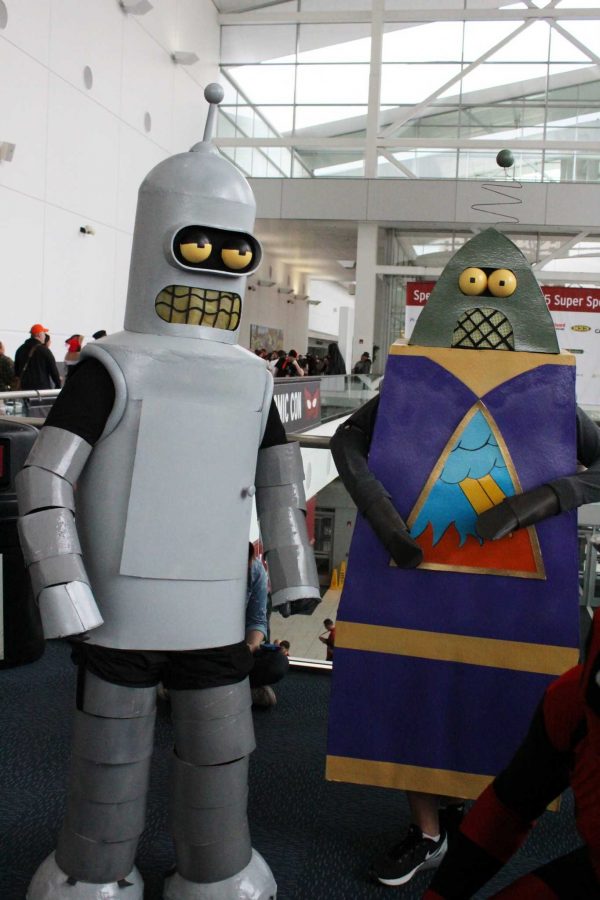 Although Comic Con originated as a convention for comic book fans, cosplay costumes have expanded to include a myriad of pop culture icons, including Bender and Reverend Lionel Preacherbot from "Futurama." (Photo credit: Katie Schmidt)

It is estimated that an attendee at Denver Comic Con can find about 100 Harley Quinn cosplayers in a day. At least, according to the owners of Gryphon Games and Comics.

The comic book retailer, based out of Fort Collins and Cheyenne, was one of hundreds of vendors on the exhibitor floor at Denver Comic Con 2015, held May 23 through 25 at the Colorado Convention Center.

Gryphon Games and Comics has been selling comics, board games and action figures for a decade.

“A lot of people in the last 10 years have come to know and love us,” said Sherman Sanders, who runs Gryphon Games and Comic with his wife, Liana Sanders.

This was the fourth year Comic Con was held in Denver. According to the website, the inaugural Denver Comic Con brought in 27,700 people, the second-largest convention opening in history. This year, an estimated 101,500 people attended the event, making it one of the biggest Comic Con locations, according to Denver 9 News.

The exhibitor floor included more than just comic books. Although Comic Con originated as a convention for comic book fans, the annual event has expanded to include geek and pop culture. Vendors also sold merchandise ranging from the Doctor’s sonic screwdriver to jerseys for team Lannister.

The exhibitor floor is also a showcase for local artists. One of which was the Naughty Rabbit, run by Elisabeth Holmes. Holmes began her business of making rabbit figurines to pay off her rabbit’s medical bills, and has continued the Naughty Rabbit ever since. Holmes’ rabbit figurines are depicted as characters from “Star Trek,” “Lord of the Rings” and many more series.

Many attendees said they enjoyed seeing the cosplayers. Colorado State University student Nola Catlow and her friend Anne Osborn said their favorite cosplay costumes were “Monty Python and the Holy Grail” and a female Legolas.

Catlow, a senior health and exercise science student, said she also enjoyed getting stopped for pictures of her Darth Vader costume.

Collegian Managing Editor Katie Schmidt can be reached at entertainment@collegian.com and on Twitter @KatieDSchmidt.