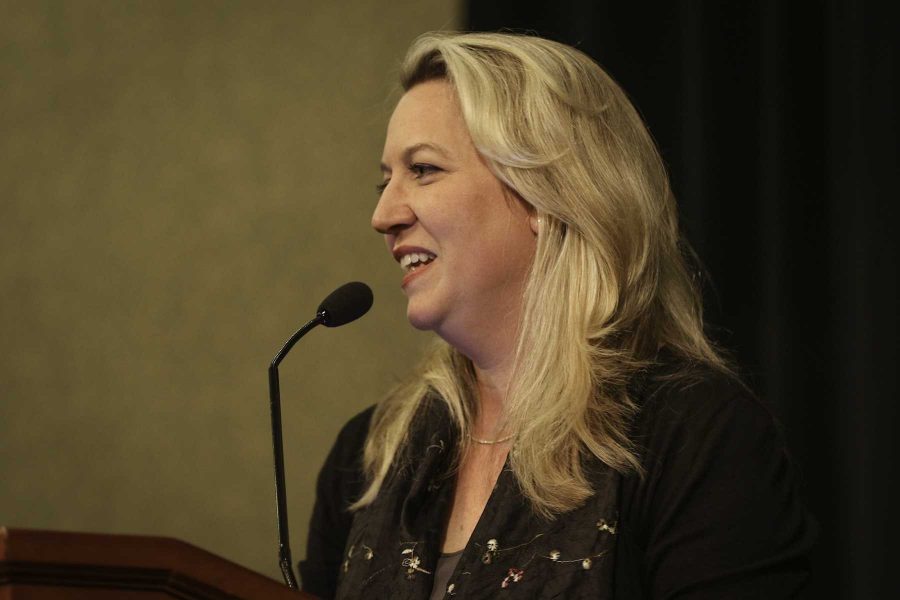 Cheryl Strayed spoke about her book "Wild", as well as some of her other works, Thursday night at the Hilton Hotel in Fort Collins. (Photo Credit: McKenzie Coyle)

New York Times Bestselling author Cheryl Strayed spoke in the Hilton Ballroom Thursday, talking about the traumatic events of her life and reading excerpts from her widely popular novel, “Wild.”

The event was free and open to the public, and the public certainly took advantage.

I showed up two hours early in order to get a good seat, and I still only managed to get a seat in the third row. Some privileged nobles of Fort Collins had “reserved seats.” The nerve.

The gloriously lit ballroom sat some 500 people, with about 75 standing against all four walls and a group of dedicated fans sitting around Strayed’s podium.

Everyone was teeming with excitement, and by everyone, I mean all the hundreds of happy old ladies who dragged their reluctant husbands along.

Husbands and boyfriends initially looked bored out of their minds, and were all putting their arms around their significant others for a mind-distracting cuddle, and to subconsciously say, “Honey, what on Earth did I do to deserve this impending torture?”

But, almost immediately, the crowd, including myself, fell in love with Cheryl Strayed.

Her novel “Wild,” is an autobiographical account of the lowest point in the author’s life, brought upon by a poisonous relationship and the unexpected death of her mother. She did what she thought she needed to do at the time — hike alone on the Pacific Crest Trail.

I haven’t read the book, though just from hearing Strayed read small excerpts, it sounds absolutely worth a read, even though I’ve already seen the film the book was based on.

The film, starring Reese Witherspoon, is a fantastic addition to the film canon of the American road trip. Strayed spoke highly of the film, and especially highly of Witherspoon, who became her dear friend during the shoot.

She recalled her short cameo at the beginning of the film where she plays a truck driver telling Reese “good luck” on her upcoming journey. Though a simple part, the line clearly weighed heavily on Strayed, who was essentially traveling back in time and giving advice to her younger self.

The novel is known for its brutally honest prose and ability to absolutely connect the reader through Strayed’s thoughts and personality. In this case, art was an imitation of life, as Strayed spoke in person with the same intensity and honesty as in the narration of her novel.

She proved to be a master public speaker, keeping the audience engaged —laughing and crying at all the appropriate moments. Even the aforementioned husbands and boyfriends found themselves holding back some tears after Strayed’s compassionate speeches.

She ended her reading with an excerpt from her essay collection “Tiny Beautiful Things,” which was definitely the most profound moment of the night, throwing out what is certainly one of her best lines from any of her work: “Don’t be afraid to break your own heart.”

After the reading she hosted an open Q and A session, for which the entire audience stayed, unable to pull themselves away from Strayed’s entertaining eloquence.

One brave girl came up to the microphone and told a heartbreaking story about the trials of her own life, and how reading “Wild” gave her a sudden vision of how everything could be better and gave her the courage to follow that vision.

Strayed also revealed her favorite quote, from Emily Dickinson, which perfectly accentuates the themes of her novel, and her life in general. It was, “If your nerve deny you, go above your nerve.”

Collegian A&E Writer Morgan Smith can be reached at entertainment@collegian.com or on Twitter @MDSFilms.