‘The Hobbit’: An unexpected play 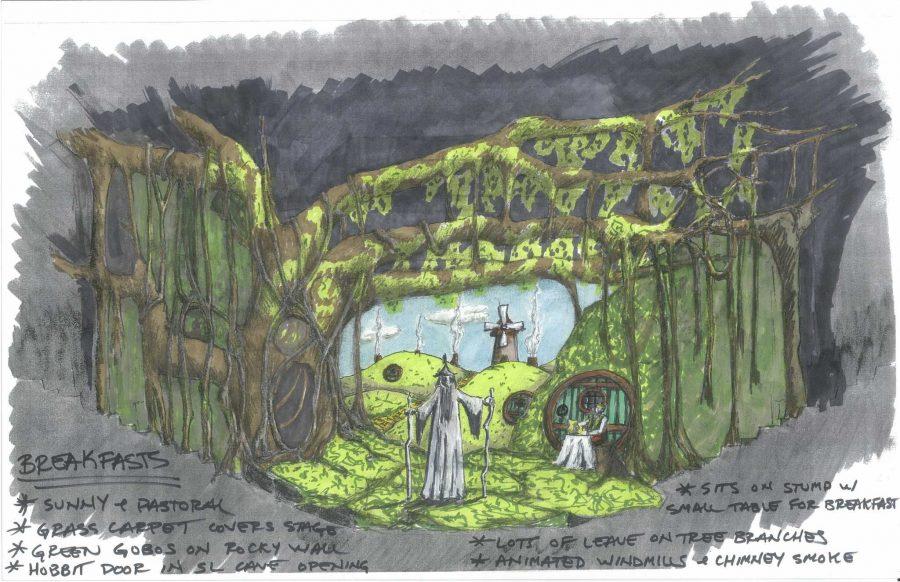 In a theater above the ground lived a hobbit. Not a shabby, filthy, cheap theater, filled with old curtains and a smell of decay, nor yet a bland, bare, boring theater with terrible seats and acoustics. It was a CSU theater, and that means spectacle.

To say the stage is dressed up for the spring production of “The Hobbit” would be an understatement. A complete transformation would be the most accurate description. It appears that seats have been placed into Middle Earth itself rather than Middle Earth hastily shoved into a theater.

Jagged grey rocks litter front stage, a giant tree from Mirkwood reaches almost through the entire auditorium and a certain fire drake from the north peeks from backstage. This fantasy realm recreated in loving fashion will be available to everyone starting April 23.

Rob Lauer is the guest director for “The Hobbit,” coming from a professional background as a playwright and artistic director in many cities including New York City.

“The design work is really magnificent,” Lauer said of his experience working at Colorado State University. “You really would have to go to every well-known regional theater or maybe even Broadway to see production values this high.”

An important aspect of the production is the devotion of the staff.

“We have a lot of Tolkien fans, dare I say fanatics, on our design team,” Lauer said. “They brought a lot of years of love from the story to the design process.”

This hard work shows in the visual components of “The Hobbit.”

“I am just very pleased,” Lauer said. “The costumes are gorgeous. I sent some pictures to my brother, who is in the wardrobe department of ‘The Lion King’ on Broadway, and he was just blown away by the quality of the costume design and the puppets.”

Lauer expressed satisfaction in the final product of the production.

“It has proved to be a spectacular and very impressive production, probably unlike anything that has been in Fort Collins,” Lauer said.

While Lauer said he is used to 12- to 16-day professional productions, the five weeks of rehearsals for “The Hobbit” were a luxury for him. Students took off their spring breaks to work full time on this play, often working up to eight hours a day.

Trevor Grattan, a sixth year business and theater major, is playing the role of Thorin Oakenshield. Thorin is the leader of the 12 dwarves in “The Hobbit” and the rightful ruler of Erebor, the lost dwarf kingdom in the Lonely Mountain.

“I wanted to show everybody what I could do, and I feel like I nailed it,” Grattan said about his audition for the role.

The character of Thorin is colorful and challenging, but even more so is the production itself.

“This is the most intense show, both technically and visually, that I’ve ever seen at CSU,” Grattan said.

Zhanna Gurvich, a scene painting and storyboarding faculty member in the theater department, is the lead production designer. The process of designing the stage, costumes and props has been several months in the making, with design decisions and sketches going back to 2014.

A found-object motif, cardboard, newspaper and other recyclable materials were used for most of the structures and costumes, bringing up the image of a Terry Gilliam film.

Chris Olson, a senior double majoring in theater and journalism, is playing the lead role of Bilbo Baggins, his first lead role at CSU.

“At the end of the year, they announced we were doing ‘The Hobbit,’ which got me excited because I am very short,” Olson said.

Olson intends to stay true to the literary representation of Bilbo.

“My Bilbo is someone who really likes tradition,” Olson said. “He is content with just staying home, but he is also very curious. He’s proud and he has a very proud lineage.”

Ryan Miller, a senior theater major, is playing Gandalf the Grey. He applied for the role because he is a “very large human being, 6 foot 2 and 200 pounds.”

Miller works on stilts for his role, bringing his total height to a little under 8 feet. Along with his wig, beard, tunic and makeup, his total preparation for each night runs at about two hours, half an hour longer than the show itself.

“My Gandalf is not perfect,” Miller said. “There are some moments in the show when he doubts if he’s made the right decisions and wonders whether or not it will all come together, but by the glory of Gandalf, of course, it comes together.”

Siobhan Gleason, a former technical theater major, and Maile Speetjens, a CSU costuming professor, are the makeup and costume artists for “The Hobbit.”

They also have a principal design team of four people, as well as the support of the costume shop, a group of eight to ten people.

The two designers talked about how they approached the found-object motif of the play, creating characters’ costumes in a way that visually reflected their environments. They used nuts, bolts, lights and an overwhelming amount of hot glue to bring the characters of “The Hobbit” to life in a fresh, new way.

Further in the recesses of the stage, there were hints of what seemed to be swords, trolls, gold and much more that you will have to buy a ticket to see at “The Hobbit.”

A full list of dates can be found below.

Collegian A&E Writer Morgan Smith can be reached at entertainment@collegian.com or on Twitter @MDSfilms.