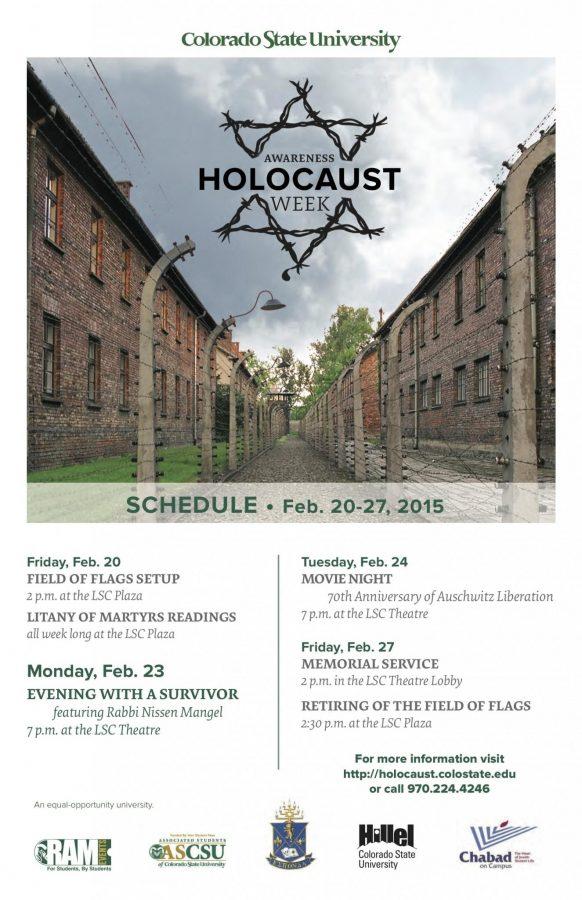 This year for the 7oth anniversary of the Auschwitz Liberation, several student groups are focused on getting Colorado State University to understand the past atrocity of the Holocaust and put it in the context of what is happening in today’s world. According to the CSU-sponsored website, commemorative events will be held around campus through Friday of this week.

Tuesday at 7 p.m., the Lory Student Center Theater will be playing a documentary called “70th Anniversary of Auschwitz Liberation” as part of Holocaust Awareness Week.

“The importance of this whole thing is the 70th anniversary of the liberation—you add 70 years, plus say some of these people were 20 or even 30 years old going through this, right?” said Adam Fedrid, adviser for the Chabad Jewish Student Center. “[Survivors] are very few and far between. In the years coming forward, there [are] not going to be as many survivors. They’re all dwindling off with age, so it’s a pretty powerful year.”

Hazan says this need for recall is the main goal of the Students for Holocaust Awareness for the week. The organization is partnering with Hillel Foundation for Jewish Campus Life, Chabad Jewish Student Organization and Alpha Epsilon Pi international fraternity to make the events possible.

Fedrid feels it is important for the reality of what happened to be brought into the open and accepted for the atrocity that it was.

“For people to sit and say the Holocaust never happened is completely wrong,” Fedrid said. “We want to make sure we bring about awareness and actual people so that people never forget.”

After the documentary, there will be a communal discussion lead by student volunteers. Fedrid said the discussion is another way to tie in the theme of connecting the Holocaust to today’s world problems, specifically discrimination by groups such as ISIS and the militant demonstrations happening by Boko Haram.

“It echoes the past and we don’t want to relive the past, and so that’s why it’s so important to remember what already happened and stop what’s going on now,” Fedrid said. “It’s [these groups’] way or the highway and it’s not right. The Nazis—same thing.”

Fedrid said the the ultimate goal of the discussion is to talk about what is going on in the world and how it relates to the Holocaust. The main takeaway that students should interpret is that it is important to remember the past to not relive it in the future, he said.

Fedrid said that although the U.S. should not act as the world police, it needs to learn from the past and prevent more atrocities from happening.

“Action needs to be taken,” Fedrid said. “We are the most powerful country in the world. We’ve got to start stepping up and saving some of these people. It’s not right for the human race.”

Collegian A&E Writer Sierra Cymes can be reached at entertainment@collegian.com or on twitter @sierra_cymes.