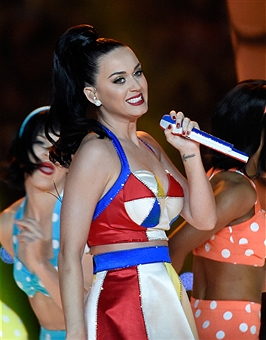 The most polarizing month of the year is once again upon us.

Not only is it the month that single people snarl at happy couples as they walk by, but it also the month of the world’s most watched television program — The Super Bowl.

Some are absolutely exhilarated because their team made it so far and root for them on the edge of their seats the entire game.

There are also those who are still heartbroken that their team didn’t make it to the big game this year and are watching, careless over the outcome, simply because they still love football. For Super Bowl XLIX, this category was comprised of a large number of Denver Broncos fans, including myself.

Finally, there are those viewers who don’t care which team wins or loses, but are tuning in for the commercials, the Halftime Show or both.

This year’s Super Bowl Half Time Show in particular was highly anticipated due to the prominence of its featured star, Katy Perry. The wig-changing, bizarre outfit-wearing songstress promised fans a medley of her biggest hits at her Super Bowl press conference last Friday. We were also promised to be surprised with her guest performers and theatrics.

And surprised we were.

The magical medley performance began with one of Perry’s most recent smash hits, “Roar,” from her newest studio album “Prism.” She rode out as a girl on fire, donning a dress of flames and riding on the back of a giant robotic lion with glowing red eyes.

Wearing the same get-up, Perry began singing another of her recent hits, “Dark Horse,” while parading around on a checkered board with strange silver dancers dressed to look like chess pieces.

Then, in the blink of an eye, we were introduced to one of her two guest performers; the fabulously cool Lenny Kravitz accompanied Perry on guitar as they crooned her very first single “I Kissed a Girl” and flames shot out on the stage behind them.

After this short-lived duet, the lights went out before we saw Perry re-emerge on a stage mimicking a beach with animated palm trees and dancing sharks. In her new outfit, which matched the giant singing beach balls by her side, Perry sang her hit “Teenage Dream” from the album of the same name.

This tune transitioned into another top-charter, “California Gurls,” for which she brought dancing girls in polka dot bikinis on stage to bounce along behind her and her artfully crafted ponytail.

Soon after, we were treated to what Perry herself dubbed a “throwback performance” from her surprise guest, Missy Elliot. The hip-hop queen, with little help from Perry, performed a medley of her top songs from back in the early 2000s including “Get Your Freak On,” “Work It,” and “Lose Control.”

For her epic finale, Perry performed a slower version of the uplifting “Firework,” a song that we have all sung along to at one point or another when “we feel like a plastic bag floating in the wind wanting to start again.”

Perry pulled a wardrobe change for the final time, sporting a shiny silver gown as she was lifted up into the air on a shooting star and flew around the field. As she sang, sparklers went off behind her and fireworks shot up into the night sky.