For reference: A historical timeline of the Oscars 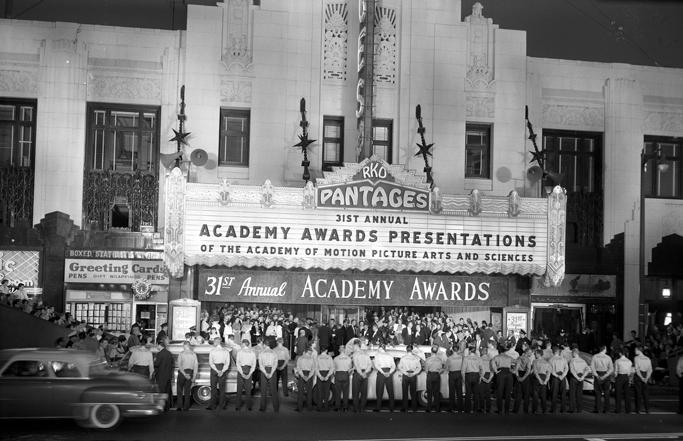 The Academy of Motion Picture Arts and Sciences has a long and rich history. Thankfully, they have kept it well documented in a timeline on their website. Here are some of the highlights of Oscar history, as provided by their timeline:
1927
The Academy was founded in 1927, when it was decided by the various studios and branches of the film industry that they needed an “organized group.” Douglas Fairbanks, a famous actor at the time, was named president.
1929
The first Academy Awards were held on May 16, 1929 at the Roosevelt Hotel in a 15 minute ceremony. The first Best Picture winner was “Wings,” and the first Directing wins went to Lewis Milestone and Frank Borzage for comedy and drama, respectively. Emil Jannings won Best Actor and Janet Gaynor won for Best Actress.

By the time of this event, the winners had already been aware of their accolades for three months. After that, and up until 1940, “the Academy kept the results secret but gave an advanced list to newspapers for publication at 11 p.m.” Unfortunately, the Los Angeles Times ruined that tradition when they published the results before the ceremony, leading to the extreme secrecy of today’s award winners.
1937
While nominations for Supporting Actor and Actress seem like obvious categories today, they weren’t actually introduced until the 1937 awards ceremony. Technical awards for editing, scoring and special effects were also added in the tail end of this decade. Documentaries were not added until 1941, and costumes weren’t up for nomination until the 1950s.


1966
This was the first year that the Oscars were telecast in color. The first actual telecast was back in 1953.
2002
Academy Awards moved to the Kodak Theatre (now titled the Dolby Theatre), the ceremony’s first permanent home.

In recent years, not too much really changed regarding the awards show. But this timeline is still missing some chunks of information. For instance, why are they called the Oscars, and how was the little gold man created?

The statuette has been around since the inception of the awards in 1929. It is 13 and a half inches tall and weighs 8 and a half pounds. The symbol of a “knight standing on a reel of film gripping a crusader’s sword” was designed by MGM’s art director Cedric Gibbons and sculpted by Los Angeles artist George Stanley.

It’s real name is technically the Academy Award of Merit, but everyone knows that it’s really just an Oscar. Apparently, no one is certain about its namesake, but according to the Academy site, “a popular story has it that upon seeing the trophy for the first time, Academy librarian (and eventual executive director) Margaret Herrick remarked that it resembled her Uncle Oscar. The Academy didn’t adopt the nickname officially until 1939, but it was widely known enough by 1934 that Hollywood columnist Sidney Skolsky used it in a piece referring to Katharine Hepburn’s first Best Actress win.”

While recognized as a symbol for success and honor in the film industry, Oscar has had his fair share of hard times as well. Originally composed of various metals under 24-karat gold, World War II required a makeover for the statue thanks to metal shortages. Recipients of the awards for three years were given painted plaster statuettes until they were able to make gold-plated versions for those winners after the war ended.

This year marks the 87th Annual Academy Awards Ceremony, so be sure to tune in to see which films will claim the historic honors.