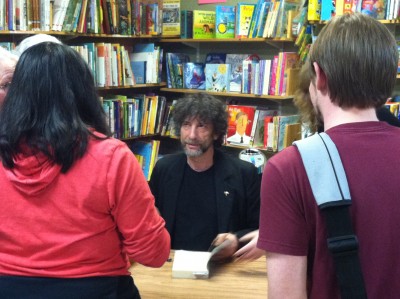 “There were already people in line at 7:45 a.m. waiting,” said Michael Whitley, an avid reader of Gaiman’s works.

Once the signing started, the line to meet Gaiman wrapped around the block with people waiting up to five hours. By the time Gaiman’s meet-and-greet finished, he had been signing books for over 11 hours and had to dunk his hands in a bucket of ice water.

“His devotion to his fans is really unparalleled,” said Kelsey Myers, an Old Firehouse Books employee.

Not only did Gaiman sign each fan’s books, but he also let each have a moment to ask questions or just talk to him.

“We got as many books in as we could,” Brandsma said. “We have people coming (for the signing) all the way from Texas and surrounding states.”

Old Firehouse Books more than doubled any other store’s sales of “Ocean at the End of the Lane,” one of Gaiman’s earlier works.

“We’re trying to show that Fort Collins is as big a force as Denver and Boulder,” Myers said.

Gaiman’s reception was very welcoming, with an air of gratitude surrounding him as he signed books and answered questions from fans.

“He’s got a good writing style, he’s one I’ll continue reading as long as he writes books,” said book signing attendee Michael Herbert. Every fan who waited in line had the same expressions of excitement, and an air of anticipation was heavy among the crowd of die-hard fans. An employee of Old Firehouse Books was on site to pass out hand-warmers, and as the air cooled towards the evening supplies dwindled rapidly.

Neil Gaiman is a critically acclaimed writer and winner of a handful of awards—from the John Newbery Medal to numerous Hugo Awards. Sandman, one of his most acclaimed titles, brought graphic novel-style storytelling into the public eye, through Gaiman’s famous method of vivid and immersive storytelling, and surreal art from the likes of Dave McKean as well as Sam Kieth. His latest book, “Trigger Warning,” was released Feb. 3.

Collegian A&E Writer Dom Lopez can be reached at entertainment@collegian.com or on twitter @DominiqueLopez.