‘Spring Awakening’ at the Lincoln Center, in CSU’s hearts 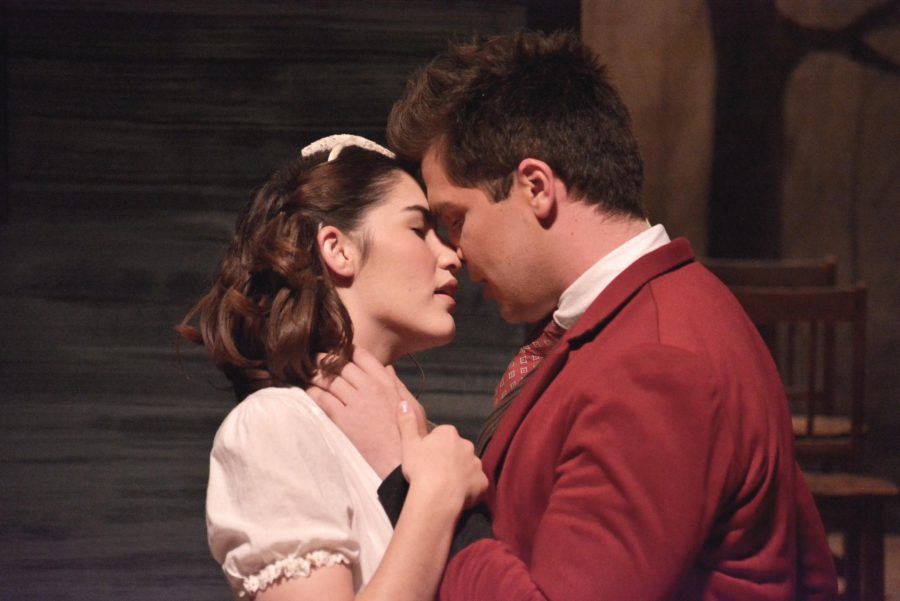 Nicole Olson and Ryan Miller, both CSU students, perform a scene from the musical Spring Awakening. The show is now playing at the Lincoln Center.

Described as a veritable lovechild between punk rock and late-19th century expressionism, Frank Wedekind’s “Spring Awakening” has something for everybody.

OpenStage Theatre & Company is performing the revolutionary piece at the Lincoln Center throughout the month.

Adapted from the original 1891 German play by Wedekind, the 2006 show features a rock score by Duncan Sheik and won eight Tony Awards, including Best Musical. Thematically, it explores the adolescent self-discovery of its protagonists, friends Wendla, Moritz and Melchior.

The director of the Fort Collins production is Candice Ingold, a CSU adjunct professor of acting and directing at the UCA. Ingold has been a teacher and a director for 11 years, is the recipient of a 2003 grant to introduce drama to curricula in 13 different countries and is a CSU alumna.

“What’s different about ‘Spring Awakening’ from anything else I’ve ever done before is its heavy content and controversial nature,” Ingold said. “It was banned in Germany because of its sheer rawness. The production is a combination of stillness and explosiveness.”

According to Ingold, the music sounds like it belongs in a Green Day concert, and the themes range from suicide to homosexuality to abortion. Ingold said the play is a personal project for her because her brother took his own life the year it was released.

“I think college students can relate most to the content since it’s geared towards them,” Ingold said. “I had four students email me saying that they were non-theater majors and they never realized before seeing this how fun theater can be.”

It has been the most challenging show she has ever worked on and has provided the most professional growth, Ingold said. As much credit is owed to the vocal coach as is owed to her own directorial efforts, according to Ingold.

“As an artist, I have a punchline that applause determines my self-worth,” Rothstein said. “If I’m not on stage, then I like helping other people realize this joy that we bring to ourselves and to others.”

Rothstein said that audiences can expect such entertainment out of “Spring Awakening.” Even though it challenges expectations for typical musicals, it is emotional and moving and viewers so far have responded well to it, according to Rothstein.

One of these prospective audience members is CSU student Evelynn Helman, a junior majoring in theater. According to Helman, she saw a CSU production of “Spring Awakening” a few years ago.

“It’s a very dark play, which touches on everything from being a high school student all the way to rape,” Helman said. “Where other plays lack, this one is not afraid to go that extra mile. Also, it’s a musical, which adds so much to any play.”

Tickets Friday night cost $10, a third of the regular price, if you call the Lincoln Center box office in advance, and Odell Brewing Company is serving free beer at intermission Friday only. The show begins at 8 p.m. every date. You can catch it tonight and tomorrow, Nov. 14-16, 21-23 and 28-29.

As painful as it is to be a teenager, “Spring Awakening” aims to make it beautiful by capturing the timeless passion and raw truth of adolescence that lesser works of art are too afraid to talk about.