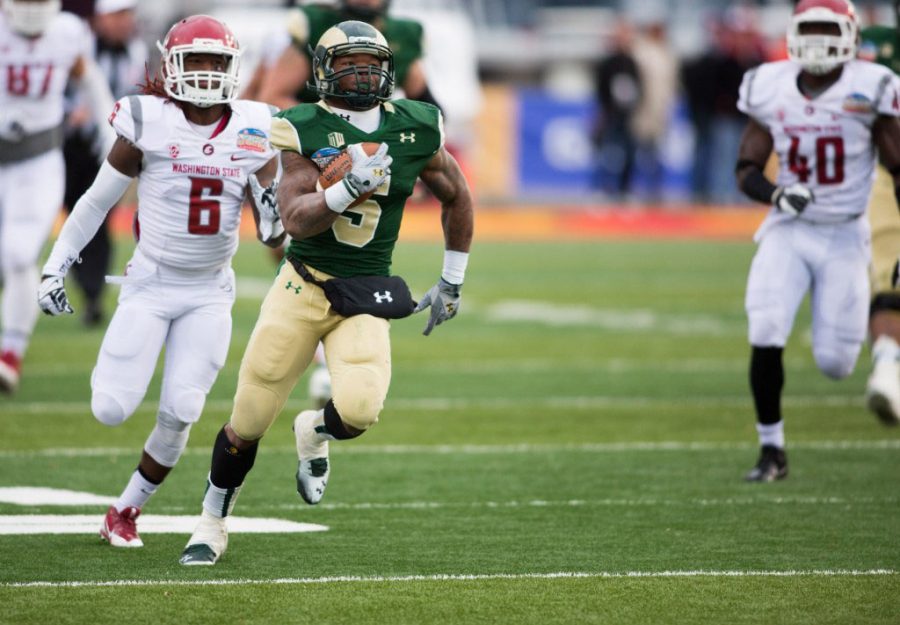 Kapri Bibbs (5) breaks away from a Washington State defender during Colorado State's 48-45 victory over the Cougars in the 2013 Gildan New Mexico Bowl.

This fictional column is based on the RamTalk: “Not too early to make travel plans for a bowl game. GO RAMS!” – Originally on Collegian.com.

It’s getting close to that time of year again.  That’s right, the college football bowl series is almost upon us. And with an impressive Rams football team here in Fort Collins, students are beginning to make plans for a CSU bowl game.

When two evenly-matched football teams from different conferences reach the end of their respective seasons, they prepare themselves for what’s known as a “bowl game.” In these face-offs, opposing teams enter a large ovular-shaped room, much like a racquetball court.

Each team is given a 40-gallon bowl of papaya juice, which they stand around with straws in hand. Using only their straws, the team must finish their bowl of papaya juice before the other in order to claim a bowl victory.  The fastest straw chuggers tend to be cornerbacks followed by fullbacks and linebackers, obviously.

Senior foosball analyst and cheeseburger optimist, Stephen Jacob, has narrowed in on some key bowl game factors when it comes to our Rams football team.

“Rashard Higgins is definitely going to be a playmaker,” Jacob said. “I recently saw him drink 42 ounces of orange juice through a McDonalds straw in 4.66 seconds flat. But he’ll clearly have to use a coffee stirring straw in the bowl game because he’s a wide receiver. That should make things interesting.”

“These bowl games really drum up the greenbacks for us papaya farmers,” Lename said. “On average, we sell about 3,000 papayas to each team in a bowl game and another 4,000 in merchandise and souvenirs.  It’s just wonderful.”

Although bowl season won’t start for a few months, demand for papayas have been rising steadily. All papaya-based stocks are expected to increase in value until bowl season and investors are taking notice.

Going to bowl games is also said to be a favorite pastime of the Pope, who is expected to be in attendance should CSU participate in one.

As for our stalwart Ram team, we’re very proud of you and can’t wait to see all the papaya juice you’ll be drinking later this year.