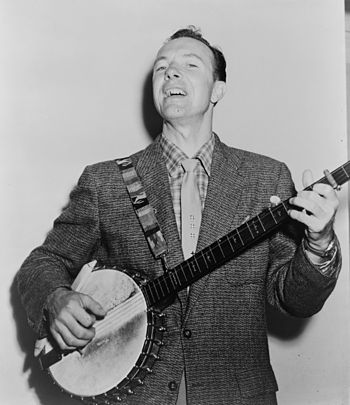 Folk singer Pete Seeger became the voice for the common man, singing and playing American and British folk songs through the Great Depression, the rise of socialist and communist political parties and the Civil Rights Movement. Songs such as “If I Had a Hammer”, “Turn, Turn, Turn” and “We Shall Overcome” communicated unspeakable feelings and a desire for radical change across the nation from the 1930s through the 1950s.

“I’ve performed at many libraries all over Colorado for very appreciative audiences which I enjoy,” Blegen said. “I don’t really try to imitate him, but I’ve listened to him for so many years that I’ve had people say that I do sound like him.”

Tonight at 7 p.m. Blegen will be presenting his Seeger concert for the first time at the Old Town Library. It is open and free to the public to come learn about and celebrate Seeger’s life.

“Especially in this time of different sort of political discourse I think some of the songs that Pete Seeger sang are as important now as they were in the 30s and 40s,” said Paula Watson-Lakamp, communications director for the Old Town Library. “I think people can still resonate with the message of the songs.”

In a time when the nation needed a voice to rally around, Seeger’s songs provided.

“He sang ‘If I had a Hammer’ at union rallies and so it means basically the hammer of justice, the bell of freedom,” Blegen said. “It’s a song about love before the days of irony–he said brotherhood could change the world and he meant it.”

“Turn, Turn, Turn” is another song of Seeger’s that was a plea for world peace. According to Seeger’s appreciation webpage, he took most of the lyrics straight from book of Ecclesiastes in the Old Testament, and added his own melody.

In his fight for human rights, Seeger was blacklisted for being a communist after joining the Party. Blegen looks at this choice in the context of the events of the time.

“Communism, socialism, they were just a lot of different political movements that were trying to fight for the rights of people,” Blegen said. “A lot of people weren’t paid very well and people who worked in very dangerous conditions. It’s not like he was trying to overthrow the country. He was trying to improve it.”

“We shall overcome” was a freedom song that served to unify the black community during the Civil Rights Movement. Originally a hymn, it was made popular by Seeger, and served to unify communities in the movement.

“You could not sit through a concert without him haranguing you to sing along and he even taught his audience how to sing in three part harmony,” Blegen said. “Just a real audience participation experience and I really like that.”

Seeger immersed himself in what his music meant, and was in the business of changing souls.

“I think that he felt he was a part of a bigger picture and with music could really unite people for good reasons: uniting people for positive,” Blegen said.

Collegian A&E Writer Sierra Cymes can be reached at entertainment@collegian.com or on Twitter @sierra_cymes.