Azealia Banks’ Broke with Expensive Taste is a solid comeback 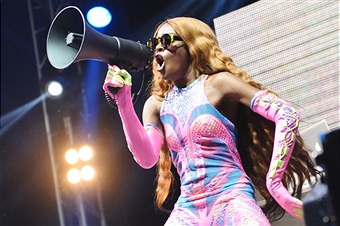 A lengthy 1,066 days after her acclaimed debut song “212,” Azealia Banks pulled a Beyoncé with the surprise release of her long-awaited debut album “Broke With Expensive Taste” Thursday.

Between record label conflicts, Twitter drama and multiple album release delays, it was unclear if Banks would ever release “Broke With Expensive Taste.” Many speculated that Banks was doomed to fade into obscurity after “212,” her well-received mixtape “Fantasea” and EP “1991.” Luckily for us, Banks has come back full force.

The album acts as a departure from earlier tracks, showcasing a wide variety of instrumental and vocal work. Ranging from the chaotic scream-fest that is “Yung Repunxel” to “Gimme a Chance,” where Banks sings and raps in Spanish over Latin percussion instrumentals, it’s clear that Banks has an extensive repertoire of abilities. Not only is Banks gifted with an incredible flow while rapping, but she proves that her singing voice is also a force to be reckoned with. Just as she whimsically sings a chorus, she fires back with a feisty and forceful rap verse.

“Broke With Expensive Taste” is reminiscent at times to the lingering house beats littered throughout “1991” and “Fantasea.” It is almost like Banks is rapping over a posh runway track, but the second you think you’ve figured the album out, Banks shifts gears in a different direction.

Opener “Idle Delilah” immediately shows off Banks’ abilities. She spits hypnotic rap verses between her sing-song melodies, effectively drawing the listener in to the wild ride that is her debut. While songs like this take a minimalist, percussion-based instrumental approach, the backing tracks on this album behind Banks’ vocals fall across the spectrum. 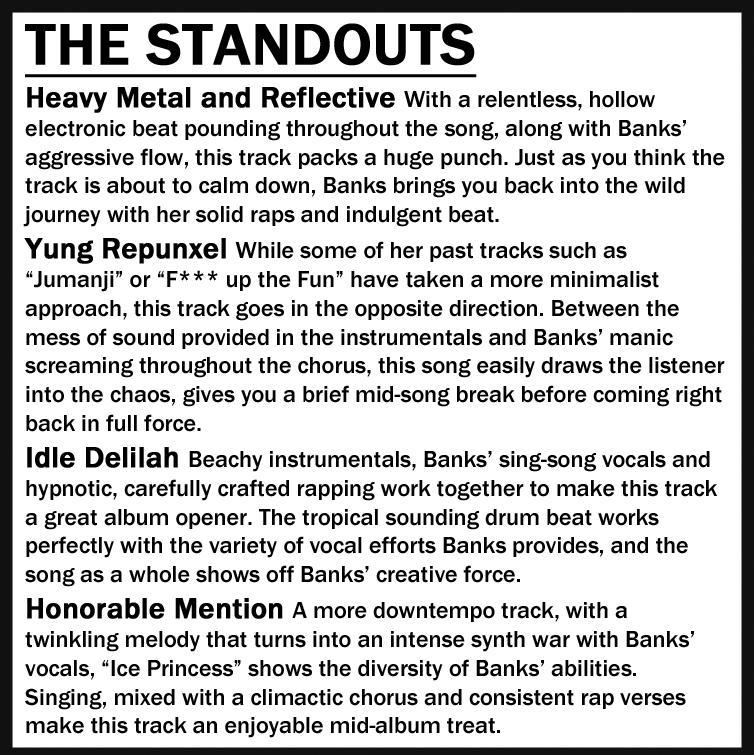 “Ice Princess” moves from delicate, xylophone-sounding tones, leading into a powerful, synth-fueled chorus. “Wallace” uses wind instruments, mixed with deep, threatening drums and marimba, making for an enhancing and audibly appealing backdrop for Banks’ equally diverse and impressive vocals. “Chasing Time” acts as a classic pop song with older house influences. While some albums suffer from a mid-album absence of good material, Banks effectively breaks up her debut with the previously released single, keeping the listener interested to hear the rest of the 16 song album.

While they are all very solid tracks, a large portion of the album features tracks that have been previously released. Songs like “Luxury,” “Yung Repunxel,” “212,” “BBD” and “Heavy Metal and Reflective” were out for some time before this album, leaving less room on the debut for fresh material. Some of this new material also falls somewhat flat. Notably, “Nude Beach a Go-Go” seems like a confusing, filler add on with a mood sharply contrasting from the rest of the album. The song is sounds like a light, beach rock jam from the ’60s, and it doesn’t really make sense. The second-to-last track acts as a weird hiccup for the last portion of the album.

The previously released “BBD” is another track that is simply not in the same league as the other songs. “BBD” is a downtempo, minimalist track that frankly never really goes anywhere. While you wait for a climax, Banks lulls in the same spot through the duration, continuously chanting, “All my bad b*tches do it,” leaving the listener bored and waiting for the next track.

Overall, “Broke With Expensive Taste” proves that, although her young career has already had some major hiccups, she has plenty of talent to share with the masses. Her album shows off stellar production, diverse vocal work and gives listeners an idea of the different paths contemporary rap music is taking. Even though the debut suffered frustrating delays that left listeners waiting for years, this surprise release was definitely worth the wait.

Collegian Social Media Editor Keegan Williams can be reached at entertainment@collegian.com or on Twitter @keeganmw.