Remembering Robin Williams with a Retrospective 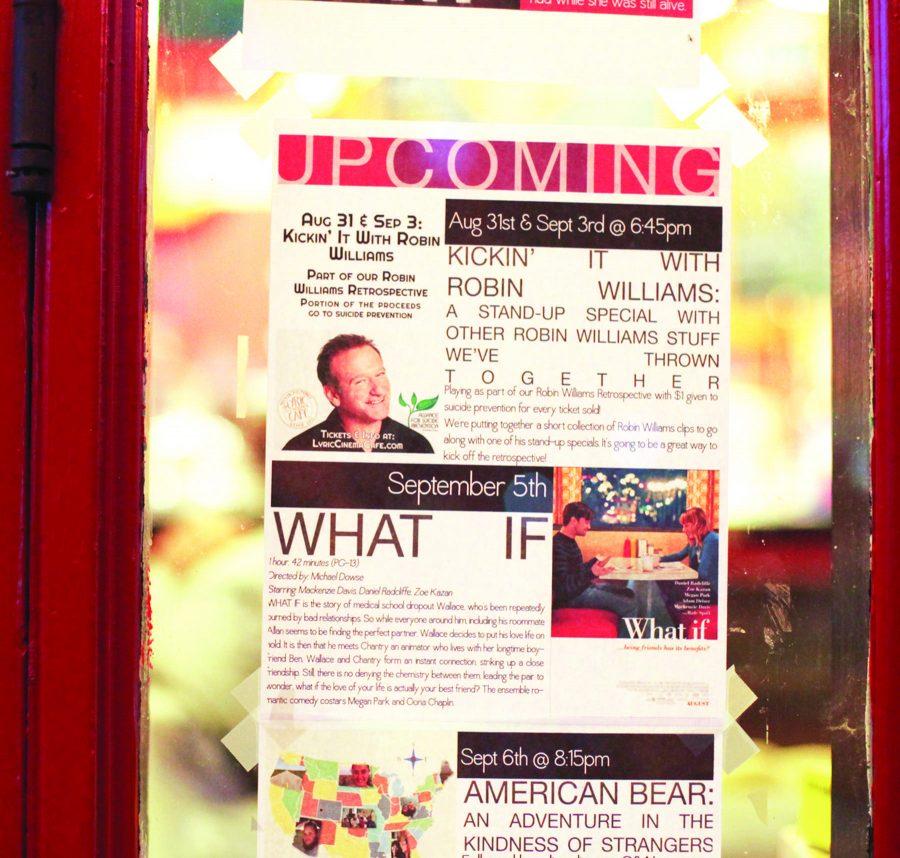 "Kickin' it with Robin Williams" at the Lyric Cinema will cost $10, $1 of the cost will be a donation to the Alliance for Suicide Prevention.

The Lyric Cinema Café is paying tribute to the late Robin Williams this month, playing a selection of his films and stand-up comedy.

The much-beloved art house theater is playing some of Williams’ most famous films: “Dead Poets Society,” “The Fisher King,“ “Good Will Hunting” and “Hook.”

They started out the retrospective Aug. 31 with what they called “Kickin’ It With Robin Williams” —  a collection of clips from his earlier work, including a full-length, hilarious stand up show from HBO.

On August 11 Robin Williams committed suicide at the age of 63. He left far before his time, leaving America shocked and saddened.

Michael Putlack, an employee at the Lyric, gave a speech before the retrospective began.

“Obviously we were really sad about it, because he brought so much joy and laughter and dirty words to everyone,” Putlack said. “We thought it would be fun to do something for it … But we knew we could do something good with all of it, too.”

The Lyric donated a dollar from every ticket bought at the retrospective to the Alliance for Suicide Prevention in Larimer county.

Putlack said this is not the first time the Lyric has done something like this.

“In the middle of the summer we did one for Philip Seymour Hoffman before we got ‘A Most Wanted Man,'” Putlack said. “We played like, seven of his films. We thought it [Robin Williams retrospective] sounded like a good idea and we could raise money for it, too.”

Robin Williams touched the lives of millions throughout the years, through his famous roles as the genie in “Aladdin,” Mr. Keating in “Dead Poets Society,” Dr. Maguire in “Good Will Hunting” and countless other roles and comedic appearances.

When asked what their favorite Williams films are, the most common answers from students on campus were “Aladdin” and “Dead Poets Society,” arguably his most memorable and most contrasting films.

“Dead Poets Society” is one of the few films ever made that will give such a sense of joy, sadness and brotherhood, thanks to Williams’ fantastic performance.

Williams suffered from cocaine and alcohol addiction early on in life, and relapsed to alcoholism. Additionally, he suffered from depression for much of his life.

Williams had an impact on fans at CSU. Samantha Seffers, undeclared freshman, thought that Williams had a message to leave.

“He would say even if you are sad, just keep on smiling,” Seffers said.

The Lyric’s retrospective continues through September. Information and tickets can be found at lyriccinemacafe.com.

Note: If you are suffering from depression, the CSU Health Network offers five free counseling sessions per student. Counseling Services is located in Aylesworth Hall and can be reached at (970) 491-6053.

Collegian A&E Writer Morgan Smith can be reached at entertainment@collegian.com and on Twitter @MDSFilms.