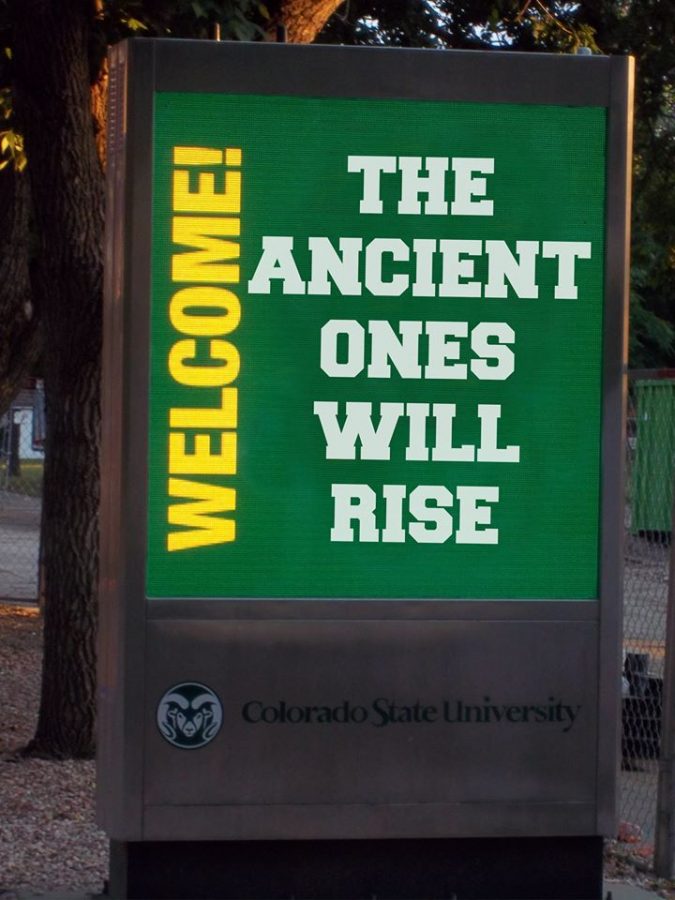 Note: This article is satirical
An uneasy quiet spread throughout the Fort Collins community this past month after several LED screens foretelling the impending apocalypse materialized on Colorado State University’s campus. The prophetic messages of doom appear every 72 minutes, sandwiched between welcome messages for incoming freshmen and advertisements for upcoming concerts at the University Center of Arts.

Although the messages of doom are said to last only seconds, several CSU students have tweeted them to us using the hashtag, #heyhallmonitorherald. After sifting through dozens of angry tweets directed at Preston Middle School’s renegade Hall Monitor, Herald, we put together an exhaustive list of the disturbing messages: “THE ANCIENT ONES WILL RISE AGAIN,” “HUMANITY’S FINAL DAYS ARE UPON US” and “PLEASE STOP USING EXCESSIVE FORCE ON STUDENTS CAUGHT WITHOUT A HALL PASS.”

“The new screens are a really neat way to welcome us to campus,” said Rory Cole, an incoming freshman who’s clearly too young to grasp the terrifying existential dread about to rain upon Fort Collins. “I can’t wait to learn how to read.”

The screens, which sources say suddenly emerged from the earth, “like some kind of crazy tree,” have confounded local scientists, police officers and botanists alike. And so, with local authorities powerless, the call to action fell upon the shoulder of the CSU Conspiracy Theory Club, as is tradition.

“The day the screens first appeared, we immediately went to work trying to dig up what exactly was happening,” said Rebecca Meyer, co-founder of the CSU Conspiracy Theory Club, shortly after checking to make sure that her lamp, telephone and cat had not been bugged.

“We’re pretty sure the Conspiracy Club is behind this, but then again, that might just be what they want you to think,” Meyer said. “I dunno, we haven’t investigated the Nefarious Plot Club in a while. But then again, the Conspiracy Club might just be trying to frame the Nefarious Plot Club, much like they did during the 1969 and 1971 moon landings.”

“We are currently stumped,” Meyer said, while furrowing her brow atop the Free-Speech-Stump and staring at the LED screen in front of her. “I wonder if Tony Frank has a secret bowling alley, or something.”