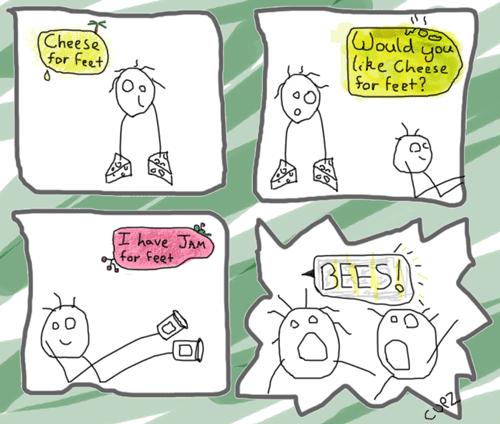 Web comics and print comics, while different mediums, have a commonality: many people wanting to launch their creations into the world. Yet in both of these avenues there are challenges and benefits.

Writer Mike Baron, a winner of two Eisner Awards whose 1981 to present career includes work for Marvel, and sci-fi comic “Nexus,” a co-creation between himself and artist Steve Rude, according to his website bloodyredbaron.net. He has seen both sides.

“They’re doing a lot of digital comics these days, and a lot of young guys are buying them, but there’re still people, and there’ll always be people, who demand a paper product if it’s a comic” Baron said. “I don’t think that’s necessarily true with prose….” Baron said. “I probably wouldn’t be published now if I couldn’t have self-published on Amazon.”

The writer talked about his exasperation with established publishers’ “blind stupidity” and their great slowness in reviewing submissions. One company accepted a work, then rejected it. According to Baron, that industry is in a chaotic panic due to New Media and self-publishing.

Baron said his recent work, like the motorcyclist crime thrillers “Biker” and “Helmet Head,” wouldn’t be in print if not for pulp house publisher Airship 27 and Amazon.com’s self-publishing program. After going this route, this “legitimate publishers” became interested in him.

“It’s like any other creative field. If you want to break into movies, the best way to do it is to make your own movie… and then you have a product out there that the thing is to make your shot count.” Baron said. “We got a chance when Capital City agreed to publish “Nexus,” and by make your shot count, I mean make an impact, do something great, be original, be startling, entertain people, because the competition is ferocious.”

“No, man, that’s the beauty!” Baron said when asked if self-publishing was costly. The graphic for a cover is the only expense. As for payment through the Amazon.com program, the author gets 60% of the proceeds from printed copies, and 70% from electronic versions, according to Baron.

As for artists on the web, some of Baron’s friends have had success. Comic artist Mike Norton created the online comic “Battle Pug,” and will have his second book released through Dark Horse.

Brien J. Miller, creator of the web comic “Deer Boy!,” has found the web an alternative to syndication in a traditional newspaper. Additionally, newspapers are dying, and the comics section is often filled with what Miller calls “dead cartoonists” – people like Charles Schultz whose work is still published despite their retirement or death. The large amount of “dead cartoonists” in many comic pages creates difficulty for those wishing to break into syndication.

On that note, Miller said the internet has created an opportunity for people of varying talent to publish their opus. But success comes from work. Miller himself has promoted his comic via buying web banners for $20 to $40 a month, setting up a table at conventions, and creating pages on wiki-type sites.

“In short, you can’t spend 100% of the time on the art- you now are lucky to get 20% of the time in, and the rest is self-promotion,” Miller said. “Yes, you can be successful; yes, you can make money– but it’s all the self-generated sweat of entrepreneurship, and it’s a lot of work, and travel, and time spent doing all the things the syndicate once did for you.”

The web comic medium also allows artists to perfect their work. This may even lead to becoming noticed by a syndicate, according to Miller. However, due to the amount of web comics created, the limited amount of syndicate talent seekers, and a preference for known artists, the chances of being noticed are small.

Hosting a comic online also allows for a lift of restrictions in content and artistic technique which traditional print comic strips present. The web medium allows artists to portray subject matter which might’ve prevented the comic from running in a newspaper.

The print method of comics also limited the choice of color varieties to what a newspaper’s press was capable of, usually four versions of cyan, magenta, yellow and black. The web allows for, according to Miller, use of radiant colors, shading and other production techniques not possible through a letterpress.

On the expense of traditional art supplies versus digital equipment, Miller said it varies. He said a computer able to handle web comic graphics could cost from $800 to $1500, a high resolution widescreen monitor could be from $400 to $600, and drawing tablets from $150 to $250. Then there’s the cost of programs like Manga Studio EX5, which costs $80, and the cost of purchasing software upgrades and later versions. However, there are open source drawing programs like “Blender” and “GIMP,” which Miller called reasonable alternatives.

Hosting a comic on the web can also provide artistic techniques not possible in print. These include sound, combining a moving image with still ones (spot animation), and animation.

“It will just be a matter of seeing if an audience used to the ‘free’ part will be willing to pay money for it in the future- especially something so content-small and whimsical as an online comic,” Miller said.

College Avenue reporter Devin O’Brien can be reached at collegeavenue@collegian.com. Look for the Interviewing Guide issue of College Avenue on racks April 23rd!