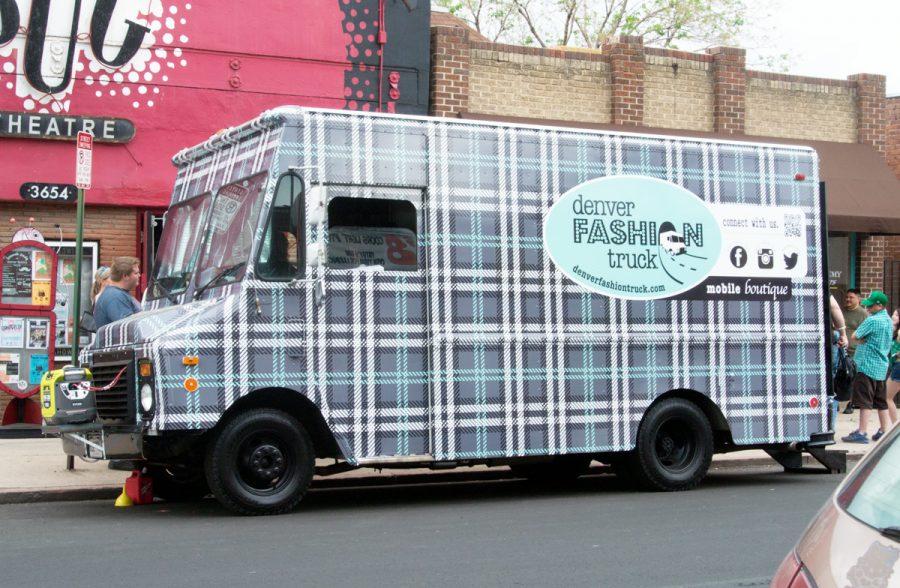 This article was contributed by Paige Beaufort.

Proud Denverites Desiree Gallegos and Adrian Barragan were pursuing their own dream when they accidentally spurred a retail revolution.

In a time when retail space is costly, this husband-wife team took their boutique business idea on the road instead, thus creating the Denver Fashion Truck. Inspired by the mobile retail scenes in Boston and San Francisco, the renovated plaid postal truck is stocked with the work of local artists and designers as well as trendy vintage finds.

Still in its infancy, the truck has begun to accumulate followers and attention since its debut in May 2013. As the brainchild of Gallegos and Barragan, the couple has connected with the growing population of start-up mobile businesses, from other fashion trucks to a barber on wheels. This small, but mighty, group has found success in numbers, and rather than compete, they work together to attract customers. The trucks often join together to appear at events and festivals throughout Denver.

Even the truck itself could not have been built without the help of graphic designers for the exterior and local mechanics and welders willing to contribute their services to create the interior. The owners’ histories in the industry have led to ample connections within the local Denver market, and there is never a shortage of products to fill the truck.

Barragan started creating public works of art in high school. It was there that he met Gallegos, and the two emerged very early into the Denver visual arts scene. Gallegos started her career in print journalism, holding jobs at Colorado papers such as the Denver Post and the now disbanded Rocky Mountain News.

She taught herself to sew and became an independent designer. She eventually connected with Brandi Shigley and Fashion Denver, a business that helps Denver entrepreneurs break into the fashion industry. One of the truck’s best-selling items are pillows handmade by Gallegos that feature Colorado-proud images such as the Denver skyline or a variation on the state flag. The co-owners are both currently attending Metropolitan State University of Denver, exploring merchandising, marketing, business and visual arts courses while still managing the truck and parenting two daughters.

Their oldest daughter, Jade Gallegos, is a second year student at CSU who has been watching her parents aspire to be entrepreneurs for a long time. In her words, Denver Fashion Truck’s ideal customer is “hipster in the sense of someone who has an appreciation for the unusual, an appreciation for art and creative people.”

Barragan was awarded the 2012-2013 Entrepreneur of the Year award from the Metropolitan State University of Denver Center of Innovation for the creation of Denver Fashion Truck. It competed with many other business ideas as part of an “artreprenuership” course that pushed students to develop their own business plan.

The ultimate goal is to take the Denver Fashion Truck from coast to coast.

“They want to share all of the talent and art that we have brewing in Colorado and in Denver,” Jade Gallegos said.

The Fashion Report can be reached at thefashionreport@hotmail.com.