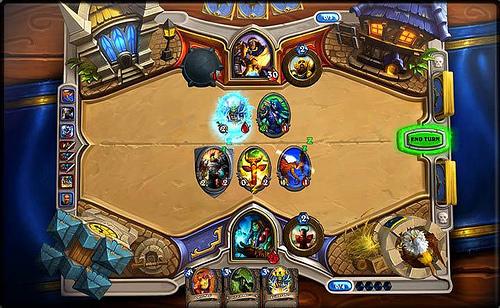 “Hearthstone”, or every video game streamer’s second favorite game, is a digital card game from the creators of the MMORPG giant World of Warcraft, Blizzard Entertainment. Fear not, you don’t need to spend hundreds of hours in World of Warcraft to understand how to play “Hearthstone”.

In fact, “Hearthstone” is very welcoming to those new to card games. The first thing you’ll notice is the presentation and attention to detail, even down to fiddling with tiny objects (such as a catapult, a campfire, etc.) at the corners of the game board while you wait for your opponent to make his turn.

Each card has its own special effects and sounds, which makes each card come alive and adds its own special flavor. The rare cards are even more exciting to play, as they’ll often have an extremely unique and awesome visual effects, some of which expand across the whole game board.

The game funnels you through a tutorial which explains the mechanics of the game and doesn’t leave you confused or baffled. Each stage of the tutorial introduces a new mechanic and is surprisingly fun to play through. Compared to other card games, both traditional card stock and digital, “Hearthstone” is simple enough to get the hang of quickly, yet still allows for a great amount of critical plays and diversity of play.

It’s a much faster paced card game and you most likely won’t be spending more than 20 to 30 minutes on each match. Like most card games, random chance is a huge factor and drawing a lucky hand (or conversely a bad hand) will play a major part in winning or losing the match.

Adding more to the depth, you can create your own decks based around nine available classes, each of which have a unique way to play. For example, the mage class has a special ability to hurl fireballs at your opponent if you choose to do so at each turn and the warrior class has the ability to place a small armor shield to his health bar, increasing his survivability. The classes also have certain cards which can only be played while playing as that particular class.

“Hearthstone” is a free-to-play game. Many times, free-to-play games can flirt with being “free to download,” but “pay to win.” However, this is not the case with “Hearthstone”, as it is completely viable to play the entirety of game without spending a single cent. Conversely, spending money will only get you card booster packs, like any other card game, that will give you a chance to pull a various set of cards.

You can also get these card booster packs by doing the “daily quest” given to you by the game, which gives you the digital currency used to purchase a booster. Disappointingly, there is no card trading in “Hearthstone”. Instead, the game gives you the option to craft cards using the ones you don’t want or need and quite frankly, is borderline useless.

Top to bottom, “Hearthstone” is a solid card game and can be really fun to play, to those curious about card games or seasoned card game veterans, this is a great game try out. 8/10