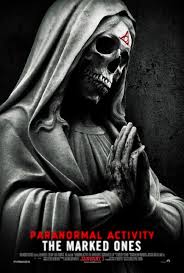 So is the world sick of found-footage films yet? Doing the whole handheld camera thing was totally still “in” back in 2012 (see Chronicle, Project X, End of Watch, every horror movie released in theaters that year), but since then, the gimmick appears to have died down a little. So far in 2014, we’ve only been subjected to two “video-camera” flicks, one of which being the newest installment in the Paranormal Activity series, The Marked Ones.

Ah, remember the days when this was still a novel idea? The first PA film rocked horror fans’ worlds when it premiered at a few festivals in 2007, and then rocketed to success in 2009 after it gained notoriety as “one of the scariest films ever made.” And, as with anything remotely successful, Hollywood made it a franchise, cranking out sequel after sequel. That’s how I find myself here in 2014, watching the fifth installment of the series, The Marked Ones.

After a yawn-inducing fourth installment, the producers have mixed things up here a little bit. We’re now following some Latino teenagers detached from the Paranormal family tree. It’s still dealing with witches and curses, but a different breed than usual. Oh, and whoever wrote the film really liked Chronicle, as they decided to throw in some superpowers and teen antics. In the end though, the differences are rather minor, and if you’re looking for some ghostly scares, you’ll find yourself right at home with The Marked Ones.

I must say I do appreciate the Paranormal Activity franchise for continuing to release slow-burn horror films to mainstream theaters. Face it, the teenage audience horror films are geared towards have an attention span about the length of a Vine clip, so it’s kind of sweet that PA films where practically nothing happens until the end are popular. But The Marked Ones isn’t a master of the slow-burn by any means; it depends on cheap jump scares throughout, where something will suddenly pop on-screen to try and make you jump. The film sporadically creates a suspenseful atmosphere, but almost immediately ruins it by throwing in a predictable cheap scare.

The slow-burn approach also doesn’t really work when the payoff at the end is stupid. Just like the third Paranormal Activity, everything here is spoiled by a silly ending. I hate spoilers, so I’ll keep it vague, but there’s stereotypical witches and one of the characters basically becomes a werewolf for some reason. It made my eyes roll more than it made my skin crawl.

Thankfully, the film doesn’t do everything wrong. It’s still compulsively watchable and the actors are likeable enough to keep you interested. The settings used are quite effective, especially a dilapidated apartment building our main characters explore to find answers. Also, it’s a mainstream Hollywood film that features lead Hispanic characters that are neither drug dealers or gardeners, and that’s definitely worthy of applause in today’s whites-only-unless-it’s-a-Tyler-Perry-film Hollywood.

But, in the end, there’s not a whole lot here. Fans of the four previous installments of the franchise are likely to find this one entertaining as well, but if you’ve tired of the series and its clichés, The Marked Ones will only reinforce those feelings. The Hispanic backdrop is really the only noteworthy element here; everything else is rehashed and done better elsewhere. It’s still fun popcorn horror, but it never evolves past that. But hey, at least it’s not The Devil Inside, am I right?