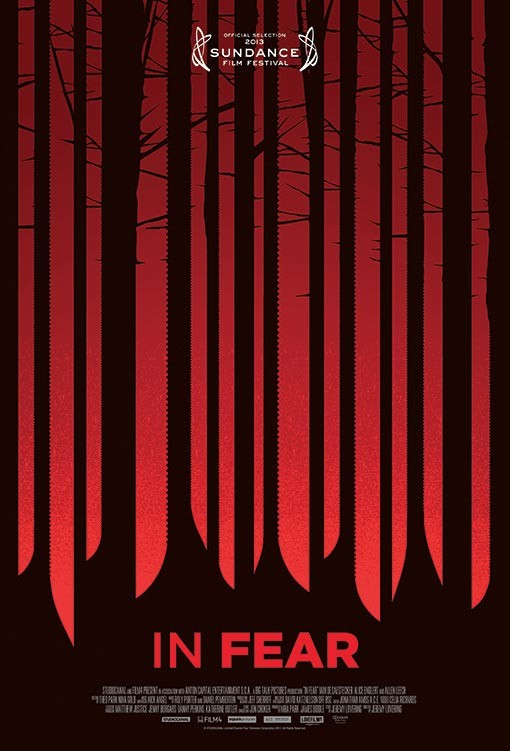 Well folks, with finals approaching frighteningly fast, it looks like this will be my last film review for the semester. Being my last review for three or four months, I decided I had to go out with a bang. So this week, I watched a low-budget, limited-release horror flick that nobody’s probably even heard of. In my defense, my Redbox options were between In Fear and 47 Ronin, and you would’ve done anything to avoid two hours of Keanu Reeves too.

So what’s In Fear all about, you ask? Well, it concerns a couple that has only been together for a couple weeks taking a road trip through Ireland to go to a music festival with some friends. But the guy has the bright idea to stay the night at a romantically secluded hotel, one that you can only reach by following a mysterious truck up into the depths of nowhere. The truck drops them off in a labyrinth of maize-surrounded back-roads, and the couple soon find themselves hopelessly lost. But it looks like they might not be the only ones in the area…

The film premiered at Sundance last year and received some pretty impressive reviews, currently holding an 83% on Rotten Tomatoes. Being the horror geek that I am, I had to check it out. But after watching In Fear, I must say my feelings are pretty mixed.

First off, director Jeremy Lovering is pretty damn good at creating dread and suspense. The setting is superbly effective, the camerawork makes the most of the limited actors and shooting locations (most of the film takes place in a car) and the isolation factor makes the film dread-filled and claustrophobic. Also of note is Lovering’s shooting tactic: the actors were not told where the plot would take them, in order to get more realistic and improvised “frightened” reactions. It’s a very cool experiment and is quite ambitious for a first-time director.

Unfortunately, the feelings of dread and claustrophobia quickly fade when the couple make another wrong turn for the umpteenth time. There’s honestly just not a whole lot to the plot, and an effective setting can only go so far. It was well-done at first, but by the forty-minute mark, I was looking at my watch.

Lovering apparently knew this, as he soon introduces another character. He says he’s a harmless bystander, but it’s rather obvious this is not the case. Unfortunately, this tactic of breaking up the film’s monotony only diminishes its atmosphere and undoes what made it good in the first place. There are some attempts to push the film into Saw-esque “mind-game” territory, but these fail rather badly. Worst of all, the entire thing starts to suffer from an abundance of plot holes and it all barely makes sense in the end.

In Fear has the same problems a lot of other mood-based, dread-causing horror films do; the film has to go somewhere and have a plot at some point, but when the plot is furthered, the sense of dread disappears. It’s a shame.

I’ve long held the belief that indie horror films are better and scarier than mainstream ones, but In Fear isn’t the best example of that. It’s quite effective in the beginning but the second half is a complete let-down and it feels way over-long at 80 minutes. Worth a try if it ever finds its way onto Netflix, but I wouldn’t spend any money on it.

(P.S.: Good luck on your finals, Rams! And thanks for reading!)