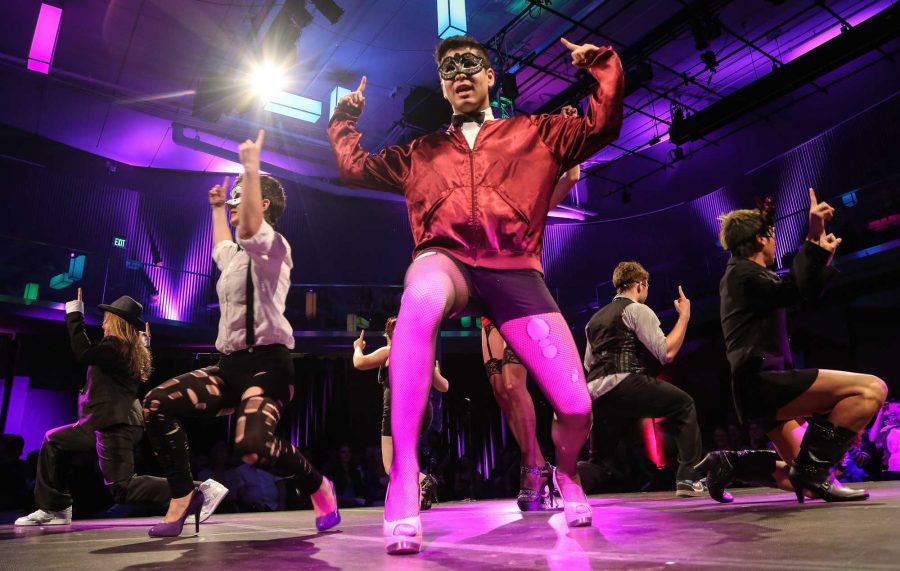 Drag co-chair Nick Delgado dances with the SOGLBT cabinet to open up the Drag Show in the Lory Student Center Theater Saturday afternoon. The annual SOGLBT drag show included a day and night performance and raised money for the Northern Colorado Aids Project. 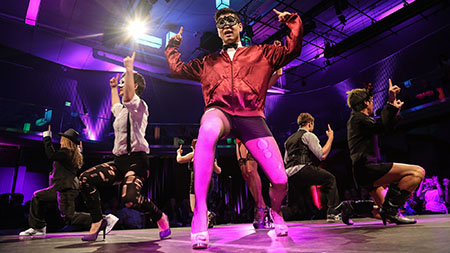 Audience members were shocked and delighted last week when the annual CSU Drag Show turned into a drag race. Those present report that this year’s SOGLBT Drag Show was proceeding along as normal until about halfway through the night when performer Jordan Hanson began making race car noises and pretending to rev an engine.

“Up until then, we’d all been having a good time, but it had been a relatively grounded, low-key night,” said audience member Ty Nickleson, who received a lap dance from three of the performers and blew out his voice during the first half of the show. “But then it turned into a Drag Race — that’s when we started having a great time.”

To the riotous applause of the audience, performer Jordan Hanson completed several quick laps around the stage, accumulating more and more performers with every circuit, as well as a few underground street racers.

“I’m really glad that the underground street racers got involved this year,” Hanson said. “We’ve been chasing the underground crowd for a while now, and if we’re being honest, I’m a little surprised they came out. The sunlight burns their skin.”

After a few minutes of running laps around the stage, Hanson led the charge into the crowd, out of the Lory Student Center and onto the half mile track that stretched all the way to the Yates Building.

“We all just lost it in the audience,” said spectator Payton Wells. “It was definitely the second or third craziest thing I’ve ever seen at a Drag Show.”

Reportedly, the idea to turn the Drag Show into a Drag Race was inspired by a similar annual event put on once a semester by the College of Business. The event, which they call the Rat Race, is basically 45 minutes of business majors wandering around Moby Arena in suits, shaking hands, backstabbing each other, etc.

It involves occasionally using a calculator and sobbing intermittently while neglecting their loved ones and deep-seated moral values, which are represented via a large body pillow propped up in the middle of the arena with a sign on it reading “INTEGRITY.” It is then slowly stabbed to death with paper clips throughout the course of the event.

“The College of Business Rat Race was definitely an inspiration,” said Drag Race coordinator Charlie Flynn. “However, we thought we’d make it a little less bleak and include a little more dancing.”

“The drag race itself was really close,” Hanson said, shortly after being awarded a trophy at the end of the night. “My buddy Kendall had some serious horse power. Come to think of it, I’m not sure where Kendall got that horse, but whatever, it was in the spirit of things. The horse had really nice hoof-polish, too.”

According to performers and event organizers, the drag race is just the beginning.

“We also plan to turn the ASCSU presidential race into a dog race,” Hanson told our reporters while readying the dogs.