Dubskin comes back to its roots to play the Aggie 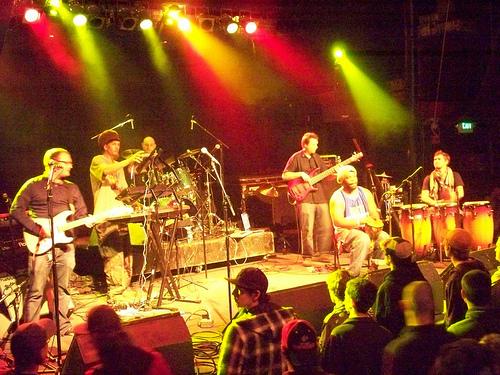 Dubskin, originating in Fort Collins eight years ago, allow themselves a lot of musical freedom. With band members stemming from Euforchestra, Motet, Funkmaster, Hurricane Dean and Rudie Clash, reggae isn’t the only style coming from their chords. Dubskin incorporates music ranging from funk, hip hop and rock, to afrobeat and Dub Steppas into their music.

“Dubskin’s music, and definitely live performances, always put me in a good mood,” said Arian Creque, a Dubskin fan for two years. “I’ve seen them 3 times and each time their message and their vibe with the crowd continues to get better.”

Jamal Skinner, vocals of Dubskin, said interacting with the crowd and having social commentary concerning specific topics like the planet’s future and the people who control and run the government systems are the types of things to expect from their intense lyrics.

Don’t let Dubskin’s name confuse you with another type of “Dubstep” DJ. Dubskin originated from “Dub,”a style of reggae music, and “skin,” the drum which is one of the world’s first instruments.

“Our style of music is diverse but it captures a wide audience as a result,” Skinner said.

“Expect a high energy show,” Skinner said. “The fans in Fort Collins always support us well and we respond by giving back good music. For the new fans who have never seen us, I’m sure it will be a great experience for them to check out one of the best bands in Fort Collins and Colorado.”

Alyssa Mckenna, a Dubskin follower as well as a political and social activist, said that Dubskin’s messages about the world give her hope.

“It’s nice to see a band wanting to make change and state their opinions and not be afraid to do so. Not only do they make great music, they provide important messages,” Mckenna said. “Besides all that, though, their shows are fun, easy-going and make me feel grounded.”

Making a name for themselves outside of the reggae-styled world, Dubskin is paving a way to get their music heard, but also their words. Their purpose isn’t only to put on an energy-packed show, but to also share subjects that human beings should be informed about without making others feel as if they have to follow their beliefs or thoughts.

Check out their “DOCS” page on their personal website for documentaries they find important from subjects about 9/11 to Cuban Raft Refugee’s and Nepal Street Kids. These films that inspired their lyrics and their music.