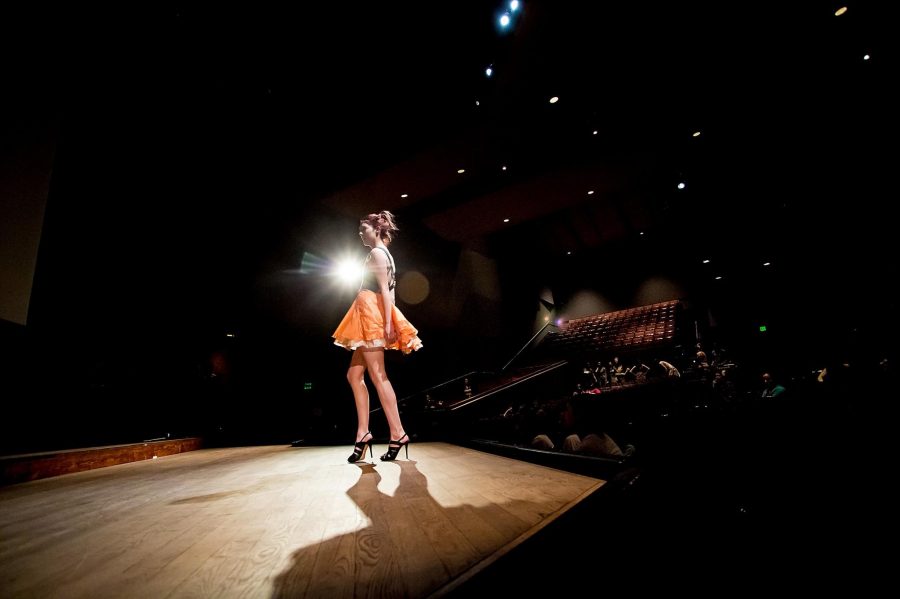 Jessie Weimer poses in a parachute dress during a dress rehersal Thursday night for the spring fashion show in the Lincoln Center. The show is put on by CSU Fashion Group International.

Four years of hard work will pay off on the runway. The designs of 25 apparel design and production seniors will strut down the runway of the 2014 CSU Fashion Show Friday at 7:30 p.m. The theme is “Rendering Reality.”

“Rendering Reality means that you’re taking some kind of an image and turning it into something else,” said Callie Morgan, a senior in apparel merchandising.

Morgan, who is the V.I.P. Reception and Sponsorship Committee Head for the show, is in charge of a V.I.P. reception before the show that will follow the Rendering Reality theme by showing the designers’ sketches of their final pieces in the show.

According to Morgan, the reception will include a silent auction of items donated by various companies, including Ugg. People with V.I.P. tickets will get three free drinks, hors d’oeuvres and premier seating at the event.

Kayla Bridge, Committee Chair of Stage Design, has been working to perfect the stage since December.

In addition to planning the stage ahead of time, Bridge will be busy working backstage during the show.

“I’m facilitating the models out of the stage,” Bridge said.

Bridge said she, along with a team of students, will also change the sets in five-minute intervals between categories of the show. There are four categories in the show, according to Megan Timlin, a co-director of the show. The first category of “Modern Visionary” features forward-thinking items.

“They give a different perspective on fashion,” Timlin said.

Next is the “Endless Adventure” category, which Timlin said is a mixture of day wear and active wear.

Timlin described the third category, “Daydreamer,” as imaginative. She said these items are less everyday and are a higher level of fashion.

Finally, the show will end with the “Midnight Romantic” category, which features dressy evening wear. These are much more formal and will even include a a bridal line.

Morgan is looking forward to seeing the actual show.

“It’ll be really cool to see all the garments,” she said.

The 2014 CSU Fashion Show is completely student-run. The designs are part of a senior capstone for designers and is described by Timlin as their final project.

Although Timlin has been planning for the show since June, the Fashion Show Production and Event Planning Class has worked on the show all year.

Bridge said she is excited to see how the show will come together.

“It will be something that grabs people’s reaction,” Bridge said.

The money made from the show will go to help fund the show and the department at CSU. Timlin said she is excited to see the final product.

“Everyone has worked so hard on this show,” Timlin said, “I’m looking forward to everyone seeing it.”