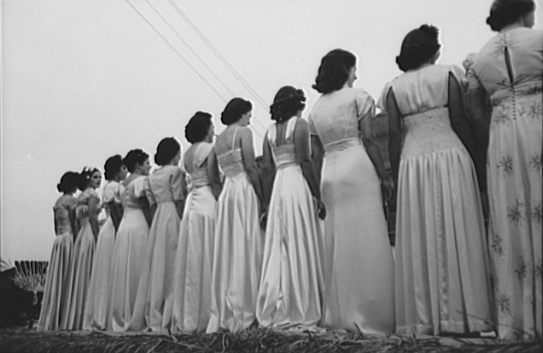 Oct. 31, and on my steps were puffy dresses, pink lipstick and long wigs. By this time it was predictable: little girls who, for one night, could be anything and chose to be princesses.

As an accused ‘bra-burning feminist,’ I held out the assorted Kit-Kats with an overwhelming feeling: How could we let this happen?

According to sociologist George Herbert Mead, our identity, or self, as individuals is a social emergent, wherein we conform to the behavior that is perceived as valuable by the “generalized other,” or consensus of society. It was exactly that which made the princesses at my doorstep so disturbing. Our youth is being taught that only a certain type of woman is beautiful.

The realization manifested in a need to create a sort of social ego death. The goal was (and remains) to live provocatively in a way antithetical of the conventional. Strip away “self”’ as dictated by society, until we are forced to understand what truly makes us beautiful. And so came baggy button-ups, etc. I did everything I could think of but cut my hair, which was the exact criticism of my professor.

“I commend where you’re coming from,” he said, “but do you think a trendy pixie cut is really outside the social consensus?”

He was right. Even in the pine to rid myself of society’s conception of beauty, my identity had still conformed. It was at that point that I lopped off my bangs in class, and, with a later purchase of a razor, proceeded to shave my head.

I admit, in that moment, I expected to see my mostly-naked scalp and hate it. However, I found a woman reborn.

The wetness on our upper cheek was a reflection of joy, in knowing that all labels are malleable as you are willing.  My tired hands had sunk into her flesh and presented between us a heart beating in raw beauty. It was who I am, not a tritely aspiring princess, but a naked warrior.

Let me be clear, I am not special. I am beautiful because I am human — you and I have that in common.