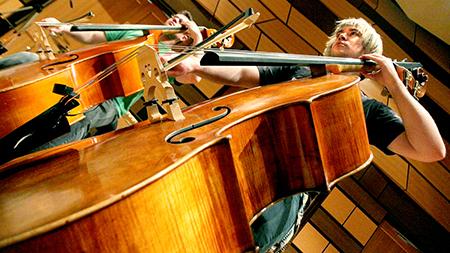 Q: How did you get involved with this event?

A: I don’t know all the detail of how it came about, but basically they realized that they wanted to perform quite a few of my pieces, so they invited me to be a part of it.

Q: Can you tell me about some of your music?

A: The Shadow of Sirius is a flute concerto that was inspired by when my wife and I lost a baby very late in pregnancy. I came out of that very depressed, as you can imagine, and I used music and this song to help me get through it.

I realized that music is a gift to all of us and can really help us through grief to find happiness and to realize that we are all connected. It’s been great going around the country sharing this piece of music — it’s about four years old and has been performed something like 160 times. I’m just very humbled by people’s reaction to it.

Q: What inspired the work you will be performing on Saturday?

It Perched for Vespers Nine was inspired by my wife’s grandfather. He was a Scottish immigrant, and he was one of those people who is always quoting poetry. Anything that happened, he would quote a line perfect for the moment.

When he was 97, he became pretty sick, he was in a coma and we were all at the hospital sitting around his bed. Then he woke up and quoted one line: “In mist or cloud, on mast or shroud, It perched for vespers nine.” None of us recognized it or knew where it was from, and he fell asleep and passed away before we could ask.

He left us wondering about that last line of poetry and what it meant because he always had the right thing to say. So, I went and Googled it, and turns out it’s from The Rime of the Ancient Mariner.

Q: What is the meaning behind the song?

The line he had quoted came from the stanza directly before the man shoots the albatross. It is the moment just before the mariner makes the most pivotal mistake of his life. I really started contemplating what it might mean to be in that moment, and I wrote this song.

On the surface, you might get some idea of the sea gently moving in front of you, a bird flying overhead, and the sun beating down. But there’s also this deeper level of meditation on what it means to be in such a pivotal moment in your life.

Both of these songs and more of Puckett’s music is available to listen to at soundcloud.com/joel-puckett. The concert will take place from 3-4 p.m. Saturday in Griffin Concert Hall.

Collegian Entertainment Reporter Katie Salka can be reached at entertainment@collegian.com.