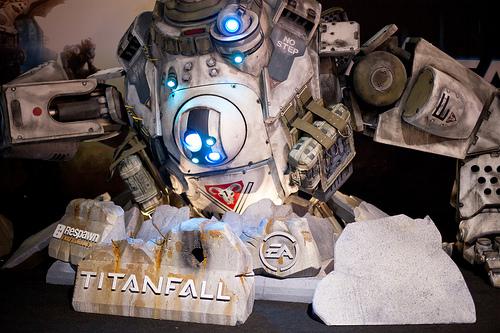 I was lucky enough to get early access to play the Titanfall beta, which allowed me to get a first look at the game about one month before release. Right off the bat, the most interesting and prospective thing about Titanfall is perhaps its combination of gigantic robot and regular human Call-of-Duty style combat.

After a few minutes into the game, you’re able to summon gigantic robots from the sky, known as Titans. This is quite a spectacle because you can not only see your summoned Titan fall from the sky, but you can also hear it crackling as goes through the planet’s atmosphere and then slam onto the battlefield. It doesn’t end there  — instead of just crawling into your Titan, the gigantic robot will actually grab you and throw you into the cockpit, almost as if it were eager to get into a fight.

But does this Call-of-Duty style game work? At least from what I played in the beta, the answer is yes. It very tactfully mixing two games into one. You’re able to customize your Titan just as much as your soldier, which means new weapons, abilities, Titan chassis and more. Another very interesting thing about Titanfall is how much the game changes once the first Titans fall to the battlefield. It cranks up the action as you are being bombarded with mechs, both friendly and enemy.

Sadly, there is no single player campaign in Titanfall, but the multi-player is designed to feel like a single player match. In each game, there are non-player soldiers around the battlefield, emulating a large war effort. It is neat to see these soldiers already fighting each other and is quite spectacular to come across a few of them pulling the wounded to safety or come across two adversaries in the middle of a knife fight.

Needless to say, these grunts are not a challenge or obstacle at all — they are terrible shots and are incredibly easy to kill. Instead of a regular grunt, you are a highly trained Titan pilot and special forces soldier. At the end of each match, instead of just a pop-up of a scoreboard, there is an epilogue. In victory, your final task is to eliminate all enemies one last time. In defeat, you are tasked to evade all enemies and board an evacuation ship so you can safely leave the battlefield.

If you’ve played Call of Duty, you will feel right at home with this game. The gun-play feels exactly like Call of Duty. In addition to the Titans, the game puts an extra emphasis in skillful movement. Parkour is fully featured, meaning wall running, sprinting, jumping and climbing is certainly something that you need to take advantage of or die by the hand of enemy Titans or pilots. Not being able to do this means you’ll be easy pickings for the enemy. Overall, Titanfall is shaping up to be a fantastic triple-A title and certainly a game to keep an eye out for in March.