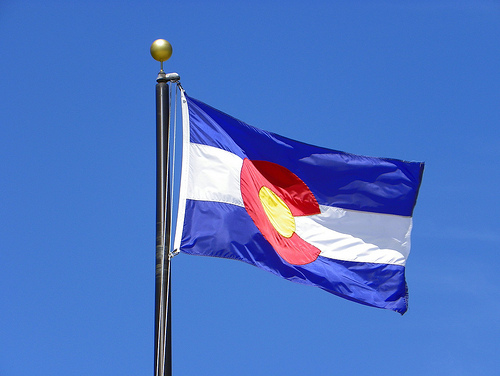 Residing in the empty shell of Glorie Cafe on College and Laurel, The Colorado Room serves fresh local eats not seen anywhere else.

Executive Chef David Richter from the TAG restaurants in Denver has created a tantalizing menu of slider-sized sandwiches, wings, poutine and fries. The food uses all local ingredients like Elevation Ketchup from Denver and cheese curds from Cozy Cow Dairy in Windsor. After analyzing their chalkboard menu and ordering at the counter, I sat at a rustic beetle kill log bench surrounded by eclectic local art and waited for my meal.

My main dish was a half order of poutine with pork mushroom gravy and cheddar cheese curds. For those who don’t know, poutine is a Canadian staple of fries, cheese curds and gravy that’s a growing trend in the States. Poutine isn’t normally served with meat, but I enjoyed the Colorado spin for the extra protein and saltiness. While it could have used more curds, the balance between crunchy and soggy fries was excellent. Unlike other restaurants that demote poutine to a side, a half order is a filling meal and could easily be split.

The Colorado Room has only six taps, but I found their selection to be unique and diverse. When I was there, I could have a pint of New Belgium’s Imperial Coffee Chocolate Stout, Odell’s Runoff Red IPA, Black Bottle’s Social Insecurity or Strange’s Le Bruit du Diable Farmhouse Ale. I opted for the latter and was glad I did.

The refreshing lightness of the brew complimented the heavy poutine perfectly. The amber-colored ale had just the right amount of hops at 42 International Bitterness Units and clocked in at 8.3 percent alcohol by volume. The spicy wild yeast from Belgium provided some orange, banana and earthy flavors.

For dessert, I had a side of their tater eclairs with brown sugar bacon aioli. I originally thought it would be fried balls of eclair filling, but it turned out to be fried balls of mashed potatoes mixed with eclair dough. This would be why it’s listed as a side and why chipotle and Sriracha are also available as aioli flavors. However, it was still sweet, creamy and salty. While the bacon-on-everything fad is getting tiring, it turned out to be subtle in the mixture. There are also cupcakes available for one who wants a more normal dessert.

I envision The Colorado Room becoming the casual hang out for many students and residents, including me. I ordered the poutine since it’s a rare find, but those sandwiches were hard to pass up because I wanted one of each type. I also can’t wait to see what other beers they get. However, I hope they don’t rotate their beers too frequently because I would like to have more glasses of Strange’s farmhouse ale on my next visit.

Collegian Entertainment Writer Jefferson Geiger can be reached at entertainment@collegian.com.