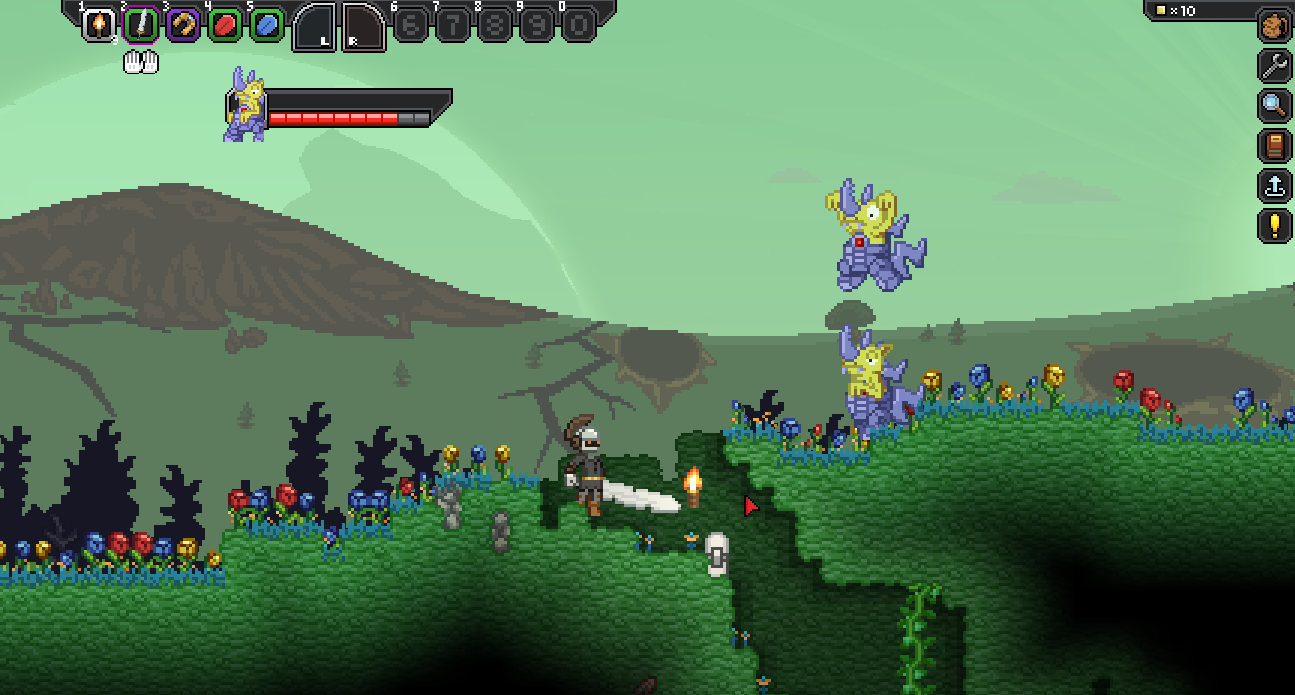 Starbound is the one of those unique games out there that the less you know about it, the more fun you’ll have discovering its vast universe – quite literally!

In an effort to preserve the magic of the game, I’ll try to keep this preview as spoiler-free as possible. The most important thing to note here is that Starbound is in beta mode, meaning the game is not fully finished yet, so there are many bugs and features that are missing. The game has been made available to those who have pre-ordered the game and would like to test it out and provide feedback to the developers.

Calling Starbound a 2D, side-scrolling, action-adventure sandbox game does not do the game proper justice. The premise of Starbound is that you are forced to flee your home planet in a spaceship for some reason specific to your race. Currently, you can play as one of six races.

There are fish-like, plant-like, bird-like robots, humans and apes — all of which are humanoid in their figure.  I rolled a robot character and was forced to flee my home planet because my robot had achieved self-awareness.

Your space ship runs out of fuel and you are fortunate enough to land on a planet far away from your home world. From there, you’re free to roam the surface of the planet, mining away for resources to craft new technologies.  Once you’ve either slaughtered or befriended the local population and advanced far enough to get a new star-map for your spaceship, you can travel through a slip-space rupture to a more “dangerous” sector of the universe. This has more difficult monsters and rare resources, which allow you to keep building new technologies.

The real magic of the game is not what you can craft, but what you discover on your journey throughout the universe.  Some planets will have sprawling cities or castles while others will have dungeons or abandoned archaeological sites.

You might get jumped by bandits, heretics and who-knows-what on your travels. There are some items in the game that are absolutely hysterical to use, like musical instruments, which can play any of the millions upon millions of MIDI song files (which then need to be converted to .abc by means of a free converter software). The game goes so far as to create a “band” in the game that synchronizes the play of each instrument with the selected song.

A common happening is that a friend will jump around in a circle playing Lady Gaga’s “Poker Face” on a harmonica while you battle a flaming bone dragon.

Starbound is a game best played with friends. In my game play experience, I was often off doing something benign, smelting some ore or mining for more, when I’d hear an excited scream over Skype “Holy cow! Look what I just found!”  or “Dude, you have to come see this!”

Starbound shows a huge amount of potential and it will be interesting to see if the game stays on course and delivers a complete experience in the future.

Collegian Reporter Diego Carrera can be reached at entertainment@collegian.com.