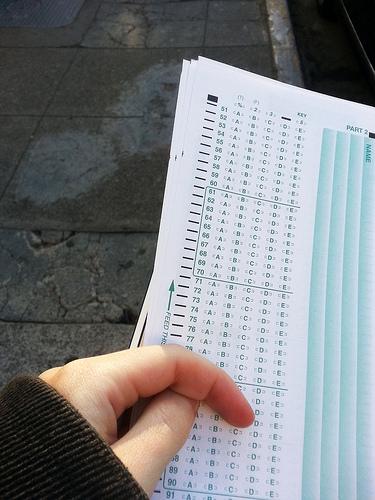 Based on the 10/18 RamTalk – The moment when you realize you merely got lucky on that first test… and the second one is next period.

Each and every student at Colorado State University faces different challenges while pursuing their degrees. That being said, everyone must face the same evil boss: academic examination. The familiar gauntlet includes multiple choice, true and false and short answer questions, but many do not realize where this thrilling testing format comes from. For that, we must explore a distant region where the number two pencils flow like wine. We must visit the world of standardized testing known as Alloftheaboveville.

Alloftheaboveville is a vast and boring place run by the all-powerful King Scantron. In his quest for world domination, King Scantron has exercised his power to make all questions really, really ridiculously confusing — especially true and false. Peasants are subjected to his standardized tests twice daily, and those who do best are more likely to move up in the caste system.

An older peasant and roast beef sculptor by the name of Nick Turishawno is not pleased with the way the testing system is designed.

“King Scantron is a real a**hole,” Turishawno said. “I can never figure out the true and false questions — they’re filled with double negatives. Double negatives!”

Villager and ferret artist Gabe Acurri does quite well on the tests.

“These tests rule!” Acurri said. “All these other nerds can’t figure it out, but I’m on my way up the caste system, baby!”

Alloftheaboveville has given us a wonderfully boring method of testing and, with number two pencils in hand, students nervously fill in bubbles like they’re diffusing a bomb. The almighty bubble controls all. Let luck be on all of your sides.