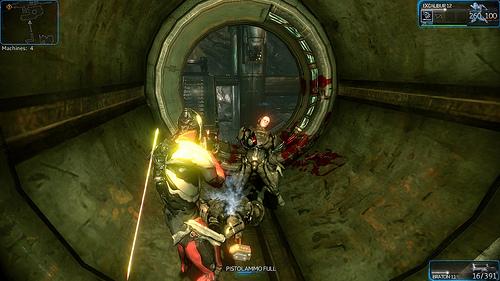 Every once in a while, I’ll find myself staring off into space in class and thinking about how cool it would be to be a ninja. In the future. In space.

This week we’ll look at Warframe, a game that allows you to do just that. Warframe is still in beta, meaning it is constantly adding new content and while it’s still experiencing technical glitches, they’re a lot fewer and farther between than one would expect.

In Warframe, you are a Tenno — a newly awakened yet ancient race of what can be best explained as a humanoid space ninja who wears suits of ridiculously high-powered armor with unique abilities that are called “Warframes.” Each Warframe alters the play style of the game immensely. For example, the Ash suit allows players to step into a more stealth-like play style, true to the ninjas. On the other hand, the Rhino suit allows for players to take an insane amount of damage and be as loud and Scarface as possible; it’s essentially a tank.

There are many other suits and all of them have different abilities and play styles. Each Warframe is equipped with four different special abilities, a primary weapon, secondary weapon and a melee weapon. The variety in each of the three weapon types allows the player to customize their play style. Perhaps you’d like quick dagger, a long range sniper and a gun slinging’ revolver to maximize your fun. Or, you could opt for a big and heavy electrical hammer, an assault rifle and two machinegun-like pistols.

Warframe is best played with friends as the game is designed to be played by two to four players. Together, you undertake missions to spy on, capture, eliminate and destroy various enemy factions’ starships and bases that they might have on planets in our native solar system. Most of the items you will acquire in Warframe will need to be crafted, which means finding the blueprints and necessary materials for each piece. This is perhaps the most tedious part of the game, and one of its biggest flaws; once you finally have all of the necessary parts and materials, you will need to wait at least 12 hours real time in order for your weapon to be completed. The suits of armor take about three days in real time to complete.

The player character’s movement, on the other hand, is perhaps one of the most intriguing things about Warframe. The game is designed to allow the player to essentially parkour, allowing you to slide, wall run, dive kick, flip and roll around your enemies. This gives it an extremely rewarding — albeit difficult to master — movement system that allows you to evade your enemies efficiently and makes you feel like the ultimate badass space ninja.

Also, the graphics of Warframe are extremely high quality. The visuals are photorealistic and make you feel like you’re really looking at these space ninjas and spaceships, all of which helps drag you deeper into Warframe’s world.

“But how is this all free to play?” one might ask, and the catch is that the developers charge for things like cosmetics (such as colors palettes to customize your Warframe), and the long wait times of building your weapon or Warframe may be bypassed for a fee. You can also buy certain weapons and Warframes outright with cash. Despite this, the game is still very far from being pay-to-win, as you are essentially expanding sideways with new play styles and 99 percent of the game is playing with friends in an awesome cooperative experience.

I highly recommend you download and play Warframe as it’s really in its own league; there is nothing out there quite like this game.