The basics of Tour de Fat 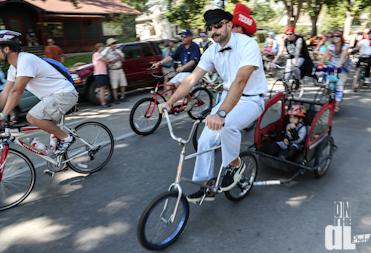 For those of you new to Fort Collins, new to Tour de Fat or who don’t seem to remember it from last year (for some reason), the festival is an annual event where everyone dresses up in crazy costumes, bikes around town and drinks New Belgium beer. The day starts off with a bike parade at 10 a.m. at the intersection of Maple Street and Meldrum Street so that participants can show off their costumes up and down Mountain Avenue and around Civic Center Park. There’s free live entertainment as well as New Belgium beer served all day at $5 for a 16 ounce pour.

Also, feel free to donate since the money goes toward local nonprofit organizations, according to New Belgium’s Tour de Fat press release. A $5 donation is requested for parade participants.

In addition to everything else going on, there will be a Car-for-Bike Swap where volunteers turn in their car keys and a commitment to live without a car for a year in exchange for a $2,250 stipend to buy a commuter bike.

To see the full parade route and get more information, check out newbelgium.com/events/tour-de-fat.

Entertainment Editor Em Kribs can be reached at entertainment@collegian.com