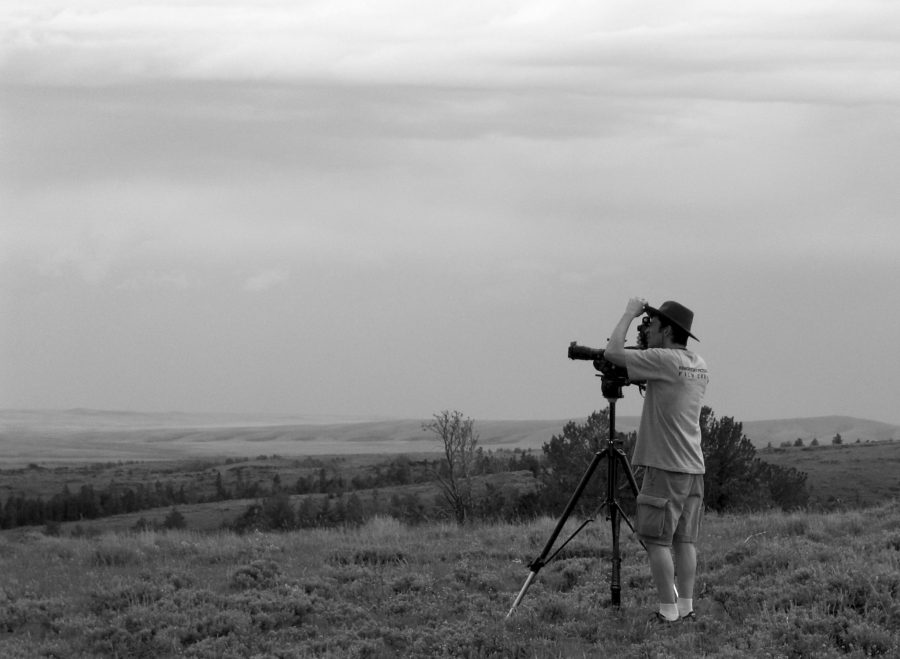 Ethan Knightchilde on location filming in Wyoming for Ghosts of the West.

Swaying doors, empty swings and abandoned roads captured the mind of director Ethan Knightchilde over a decade ago, leading to the award-winning documentary “Ghosts of the West,” featuring the old tales of treasure hunters and miners in ghost towns, showing at Fort Collins’ Lyric Cinema Cafe Aug. 3 at 7 p.m.

“The idea first came into my head when was about 9,” Kightchilde said, and decades later, the story finally began to unfold.

“It’s called Ghost of the West, however we don’t talk about ghosts at all,” said Todd Prescott, Knight Sky Productions’ executive producer.  “It’s about the history of stories that are captivating to an audience: mining camps, treasure hunting, law and some of the realities that come along with that.”

Eleven years ago, the idea became reality for Prescott and Knightchilde.

“Honestly, when you’re looking at some of these structures, they look like they’re staring back at you, and I began wondering what those naked windows had seen,” Knightchilde said.  “(Later) we did some research about the towns we visited.  The next year we went to Arizona, and the next year Colorado, and it kind of just grew.”

During the filming process, the two-man crew had, and still have, day jobs to work around.

“It didn’t provide us the luxury of being able to travel,” Prescott said.  “So we took summers to travel from Montana to Mexico trying to find ghosts towns, and trying to experience what these gold rush junkies experienced. We spent the rest of the year researching so we knew which ghost towns we could and couldn’t access.”

Soon enough, the footage began to build the arc of the story.

“In the beginning it really was almost like a filmed journal of various trips we took,” Knightchilde said.  “I thought we’d cut the best shots together, no explanation just enigmatic shots and some music, but the number of towns we visited kept accelerating. There’s a term called ghost town junkie, and I think I kind of became that.”

After years of exploration and piecing footage together, Knightchilde and Prescott brought on Adrian Hernandez to compose music that would syncopate with the cinematography.

“Capturing the old west is like trying to bring places to life that no longer exist,” Hernandez said.  “We pulled voices of traditional music like Aaron Copland.  His music had the sound we were looking for. We wanted open landscape type sounds. It’s a very visual film; it’s mixing of all those things while pulling from traditional composers,” Hernandez said.

“The melody is expanded throughout the entire documentary,  and that’s what it is: the core of the film with little elements throughout,” Hernandez said.

Accomplished narrator, Barron Christian, verbalizes the stories depicted in Ghosts of the West.

“It’s about ghost towns off the beaten path,” Christian said. “If you’re lucky, you’d come across them. It’s an explanation of those towns and how they fell; its woven in such a beautiful way that even if you’re not a affectionate, its a beautiful film.”

“We’re trying to show in areas we either shot, ate, or slept,” said Knightchilde. After winning Utah’s Best Documentary award, the documentary is in high demand by the public. Ghosts of the West will tour in small movie theaters throughout Colorado with hopes to widen its audience before the film’s premiere in Denver next year.

Content producer Sarah Prinz can be reached at news@collegian.com.