The Rocky Mountain Collegian • May 7, 2013 • https://collegian.com/articles/aande/2013/05/motion-picture-studio-offers-summer-stunt-classes-in-fort-collins/ 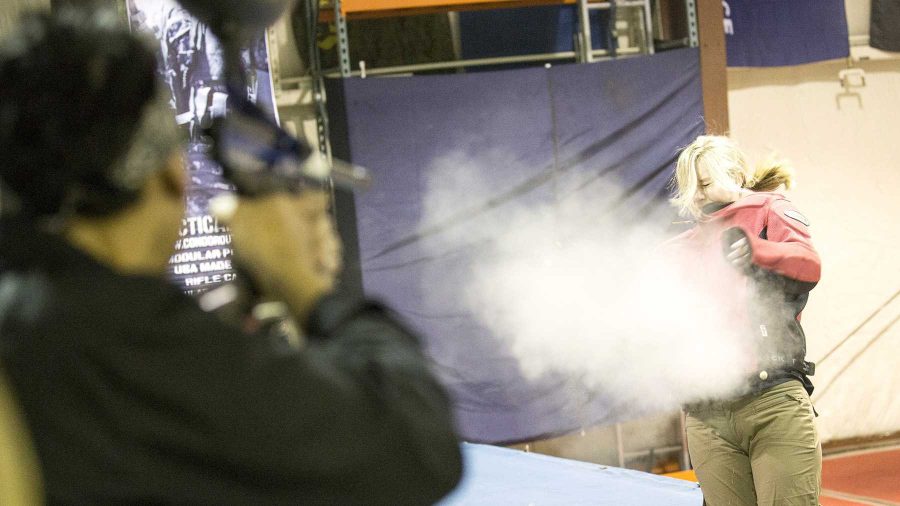 CSU alumna Kaitlyn Jaffke takes a hit from a powder-filled paintball shell to practice being shot, and dying, on set. Jaffke has been working with Robert since late January and is training to become an instructor.

“Ugly” is the name of the game at Motion Picture Stunts and Tactical Studio in Fort Collins.

Four different students took it in turns to take a flying leap off a 20 foot tall structure, executing a flip on the way down.

“Don’t do anything pretty,” said Gary “Montana” Robert, co-owner, president and stunt expert. “Take a nice gymnastics fall and transform it into something ugly.”

“We’re working on dying here,” Robert prefaced before he orally rattled off some machine gun fire; four people instantly flew backwards and sprawled on the floor, dead as doornails. Even in victory, Robert had no sympathy for his victims. “Creativity is everything,” he told them. “Two of you fell the exact same way … Get your bodies to do things that just aren’t natural.”

Everyone’s seen a clip with “Do not attempt” emblazoned across the bottom, but stunt performers have to learn somewhere. For the last 20 years, the best place to start is under Robert’s wing.

Despite the necessity of waivers, “We’ve never had a problem with injuries,” Robert said. In addition to his 20 years’ teaching experience, he’s been in the business himself for 34.

“I perfected this; I got good and I saw the need to train,” Robert said. While he began in Hollywood, Robert has since moved to Colorado, making this singularly unique education accessible to the CSU student body.

Instructor and 2012 CSU alumna Kaitlyn Jaffke has been working with Robert since late January. “My first instinct was, ‘Who is this guy?’” she said, “and my second was, ‘I can learn a lot from him.’”

The idea of performing dangerous stunts may seem beyond most people, but Connolly assures otherwise. “It’s not about strength or martial arts or gymnastics skills … it all boils down to physics.”

“(Robert) teaches all levels. He’ll make you challenge yourself, but he won’t push you,” Connolly said, adding, “If you want to master dangerous stuff, it’s the best place in Colorado.”

You can get more out of the classes than some cool tricks, however. As co-owner and marketing director Laura Dowling said, “It’s fun for me to look at movies and go, now I know how they do that.”

The studio will be doing jumps Memorial Day weekend. For more information on classes go to http://www.mpststudio.com/. The studio also encourages people to visit them at 1318 Blue Spruce Dr. in Suite 5 at the Dakota Plaza Complex.