The Rocky Mountain Collegian • May 11, 2013 • https://collegian.com/articles/aande/2013/05/far-cry-3-blood-dragon-review-insanity-just-picked-up-new-derangement/ 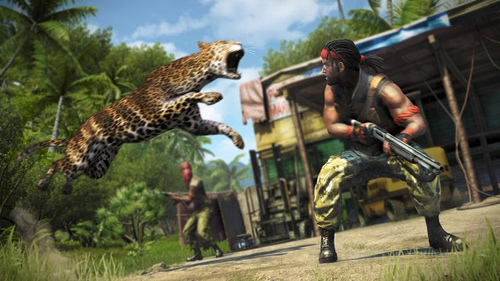 Writer’s note: I received a free copy of “Far Cry 3: Blood Dragon” in order to review the game for this publication.

The open world violence of “Far Cry 3” found a DeLorean and traveled to an alternate line of history to make “Blood Dragon.”

The story begins in ’90s videogame cinematic style, showing shoddy cartoons of what’s happening with an overdramatic narrator. In the cut-scenes it shows your character, Sgt. Rex Powercolt, being re-built from a human corpse into an unstoppable cyborg soldier.

Next thing you know, you’re shooting as many things and people as you can from a helicopter in what appears to be Daft Punk’s home planet before you storm a fortress.

In this alternate history, most of the world was nuked into fallout (another great game) in the year 2000. It is the year 2007, in which the super-cyber-soldier will make his adventure.

If all of this sounds ridiculous, good, because that is the point of this stand-alone downloadable content, and yes that means you don’t need “Far Cry 3” to get “Blood Dragon.” All you’ll need is $15 and a PC, Xbox 360 or PS3 with an Internet connection to get this game, as it is download only.

“Far Cry 3: Blood Dragon’s” entire style was based on action movies made in the ’80s and ’90s. The stereotypes are abundant in just about every sense.

Rex Powercolt can’t help but spitting out one-liners akin to “Die Hard’s” John McClane between over-the-top executions of opponents. Occasionally Rex will flip off downed enemy cyborgs or cyber-animals after ending their artificial existence. Even recognizable music from the ’80s action genre appears in the midst of missions.

If you’ve missed macho ’80s culture, this game will probably fill your need. If not, then no “Terminator” movie marathon will.

As action-packed as “Blood Dragon” sounds, I couldn’t help but laugh every few minutes I was playing, much like when watching my favorite ’80s action movies. Even when in tense situations hiding around the corner from enemies and giant dragons searching for me, hearing cyborgs usher obscene threats in horribly robotic voices left me laughing alone like a psychopath.

Laughing and then performing chain takedowns, or blowing the hell out of whatever stood in my way. I must admit this game made me feel like some dirty, buff and tanned Rambo taming the post-apocalyptic jungle while waving around a light machine gun; in other words it was just plain old fun.

If stories in games don’t interest you as much as pure action in a video game, “Blood Dragon” is what you want. The story is purposefully stupid in order to meet the ’80s action movie criteria, while the action is over-the-top to fit the same bill.

Upgrades to the guns you’re provided include: Explosive rounds, quadruple barrel shotguns, magazines so big they would make senators s*** themselves and all kinds of scopes, amongst all the other futuristic upgrades like laser rounds.

This isn’t some small blip of a DLC, but rather a full stand-alone game well worth the price. The closest thing I can think of in terms of quality DLC is “Red Dead Redemption: Undead Nightmare.” No other DLC I’ve played was able to justify its existence outside of the main game like “Blood Dragon” or “Undead Nightmare.”

The main differences in gameplay I noticed between the two games was that the player’s character is now able to sustain much more damage, and stealth killing an entire garrison is now much harder with the layout of bases.

If one thinks in terms of ’80s movies though, this is more like the formula for action: No stealth and a lot of head to head gun battles. Even all the collectables have changed from things like WWII dog tags to VHS tapes and old TVs that will unlock the outlandish upgrades for guns.

It is clear that “Far Cry” decided to make the switch from the serious issues of human slavery, drug trafficking and third-world poverty to a satire of corny action movies in order to make an entirely different game.

The new map of “Blood Dragon” presents the player with 13 garrisons to take over inside a new free-roam map; a quest or two per outpost once captured, but only six guns to use throughout the game, with a few mods each and a re-skinned bow will guide you through the new challenge.

Still this iteration of “Far Cry 3” brought me more fun than many full priced games have in a long time, so I’d recommend picking it up, especially considering it’s only $15.

My only real complaint was that there was no attached co-op or multiplayer, which is a great time with friends in the original.

Collegian Writer Matt Gabriel can be reached at entertainment@collegian.com.