The Rocky Mountain Collegian • May 10, 2013 • https://collegian.com/articles/aande/2013/05/colorado-states-12th-annual-lavender-graduation-celebrates-graduating-lgbtqa-students/ 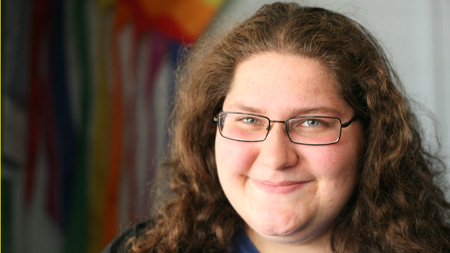 Graduating senior Zoology major Jess Cytrone will be one of many participants in Lavender Graduation Saturday in the LSC Theatre. The graduation ceremony is hosted by the Gay, Lesbian, Bisexual, & Transgender (GLBT) Resource Center and is in support of GLBTIQQ and Ally Graduates of Colorado State University.

This year, civil rights have made improvements in leaps and bounds as 11 states now allow for same-sex marriage; Colorado celebrated its legalization of civil unions just last week.

But perhaps a similarly important feat is the graduation of students as part of the LGBTQA (lesbian, gay, bisexual, transexual, queer and allied) community.

Lavender Graduation is a separate graduation ceremony to commemorate those within the LGBTQA community who have made it to graduation.

The 12th annual ceremony will take place Saturday, May 11 at 5 p.m. in the LSC Theatre.

There will be 30 graduating students honored on Saturday. The event includes two keynote speakers as well as Foula Dimopoulos, director of the LGBT Resource Center on campus.

Graduating senior zoology major, Jess Cytron, was nominated by her peers to be one of the special speakers.

“A lot of us get bullied in our younger years, and of course it continues. But it’s a disproportionate amount that actually make it into higher education. The statistics are really sad, especially LGBTQA of color (who suffer) higher rates of homelessness and hate crimes, brutality and murder,” Cytron said. “It’s important to have a separate ceremony that says you made it, and you made it with your peers in this community, and look at us and how strong and how proud we are to have obtained a degree.”

The LGBT Resource Center will be celebrating its 15th birthday as an office in August. This will be the 12th year for the Lavender Graduation, and the seventh year of it being on campus.

Lavender Graduation was begun in 1995 by Dr. Ronni Sanlow, who is the LGBT center advisor at UCLA and was recognized this year in the National Women’s Hall of Fame in New York.

“Even in 2013, LGBTQ student lives and personhoods are still debated across kitchen tables and political arenas … and still they progress towards graduation at great odds,” Dimopoulos said. “Certainly we’ve had students disowned; they’ve wound up trying to pay for college on their own after they’ve come out. And there are students (for whom) … coming out was a postive experience and for them this [LGBTQ Resource Center] is their oasis.”

For Dimopoulos, the ceremony is an opportunity to recognize students and meet people significant to them such as their families of origin.

“It gives all of us, the LGBTQA and CSU community, an opportunity to celebrate the tenacity that it takes to graduate, often against great odds,” Dimopoulos said. “Even in 2013 we’ve had all of these wonderful historical landmark events happen. and we often don’t get to celebrate those things and the achievements of them.”

Students will receive a rainbow cord and certificate for being a part of the ceremony, which also honors allies.

“I think to be a Ram is to celebrate all of our diversity and multiple facets. Sometimes it’s the people that get us through to this point that’s also important, and that’s why we include allies in our ceremony,” Dimopoulos said.

Cytron will talk about the space and the reources that the LGBT Resource Center offers to students.

“Besides a really comfy place to nap in middle of day, it’s given me kind of a safe haven. It’s a room in LSC, very central to campus, that I can go into, feel welcome, talk to people and know that I’m not expected to be anything that I’m not.” Cytron said. “I don’t have to check an identity at the door.”

“I’ve watched students struggle and celebrate, and often it’s because of loss and often because of success. It’s about transition and it’s about them, it’s about their strength and pride and their ability to be involved and invested in the world around them,” Dimopoulos said.

As for the graduating students, Dimopoulos expects them to make a difference on a daily basis, even when they might not feel like they are.

“I expect that they will inspire not only their peers but the people that come after them in ways that I don’t even know how to articulate … because they’ve inspired me often and frequently in their time here,” Dimopoulos said.