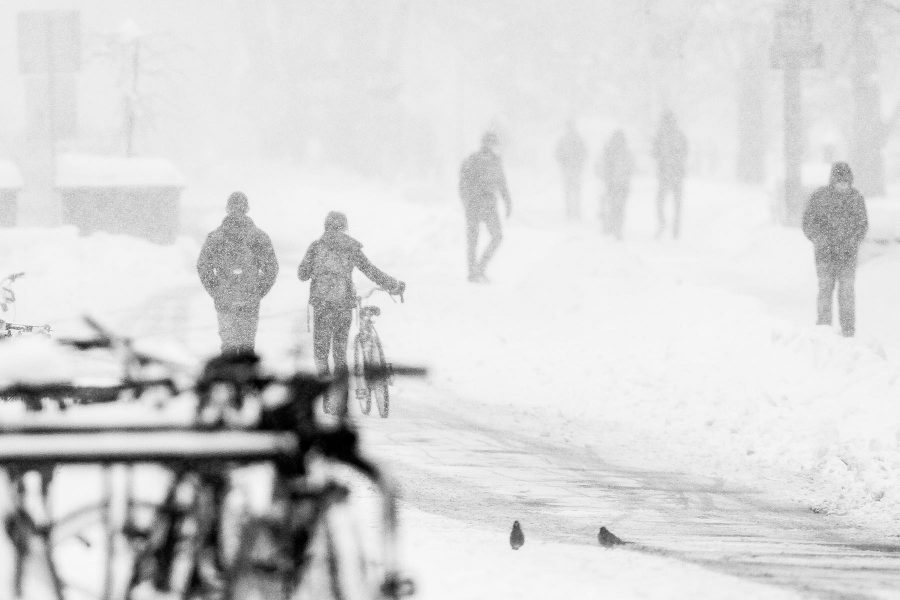 Students flee campus after Colorado State closes at noon on April 17, 2013 as a result of heavy snow accumulation and a forecast for more. (Photos by Hunter Thompson)

Based on the April 19 RamTalk – “With everyone squinting today, no one can tell if we’re hungover from the snow day or just haven’t seen the sun all week.”

Editor’s note: This column is satire, though the Collegian does endorse sunglasses as useful eyewear that can make anyone look, like, 40 percent cooler.

The snow days of last week have gone. Memories are starting to fade and the only remnants of the glorious winter storms are piles of heavy snow lying around town like obese, beached belugas.

Although they may be beautiful, do not stare directly at these snowy beasts; they may be hazardous. The Center for Winter Weather here at Colorado State has issued a warning regarding the piles of white. They are concerned because nothing makes eyeballs want to bleed more than staring at a pile of snow in direct sunlight. Snow blindness is for reals, everyone.

Students across campus are finding it difficult to get to their classes because of the reflective snow piles. Sophomore renaissance major, Rawss Wood, is one of these unfortunate souls.

“It’s worse than Medusa,” Wood said. “I’ve been squinting so much that when I open my eyes fully, my vision goes from widescreen to standard.”

“Why am I squinting?” Bosem said. “Oh, I’m just wicked hungover. I guess it is kind of bright out though. Now excuse me, kind sir, while I yarf in this bush real quick.”

College kids across Fort Collins have been admitted to eye clinics with burnt retinas and scorched corneas. Squinting is the first sign of eye damage and should be addressed as soon as it is spotted.

If you or a friend see someone squinting anytime soon, it may be much more serious than it looks. Be sure to put a hat or sunglasses on them as quickly as possible. The Center for Winter Weather also recommends that students apply a generous amount of sunscreen to their eyeballs prior to every outing to reduce sun damage. Stay safe, everybody.

Entertainment Writer Davis English can be reached at entertainment@collegian.com