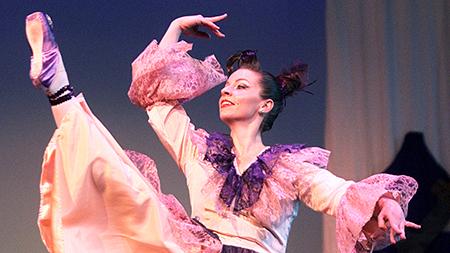 Laurel Brubacher, playing one of the step-sisters, shows off at the Prince's ball during rehearsal for the Canyon Concert Ballet's performance of Cinderella. The performances will be held April 13 and 14 at 2pm.

It started a long time ago in a kingdom far away, but now, it is just around the corner.

Saturday and Sunday at 2 p.m. the Lincoln Center will host the Canyon Concert Ballet’s rendition of ‘Cinderella.’

CCB brings the magic of this fairytale to a whole new level.

Executive director Kim Lang hopes that portraying such a renowned fairytale through the art of dance will allow audience members of all ages to identify with the story on a personal level.

“I hope the audience will be able to use their imagination and tell the story in their own heads however they choose to interpret it,” Lang said.

The ballet is perfect for families, and will expose the community to the beauty and artistry of dance.

“My job is not complete until the dancers give life to this story,” said special guest director and choreographer, Margaret Willingham. “What you see in the book as adjectives, you will see in the show through movements of the body.”

“Dance is so magical because you see it with your eyes, and hear it with your ears, but your heart is what responds to it,” Willingham said.

Preparations for the show began in August and auditions were held in January. The performers have been hard at work for weeks.

“The production process has been fun and positive, and we’ve all been working really hard. We have a great tech team and some beautiful costumes and props,” Lang said.

Matthew Clark plays the show’s Prince Charming. He has been dancing with CCB for six years, and is a Colorado State alumnus.

Clark began dancing when he was six years old. Although he loved it, he soon quit and eventually graduated college to be a police officer.

“Working with the Police Department was not something I intended to do, but I enjoyed it,” Clark said.

However, soon enough, Clark discovered CCB and his passion was rekindled.

“I continued doing both (dance and being a police officer). Ballet is a great way to stay in shape if you’re going to be chasing people down,” Clark said.

“I dance with CCB because they are so fantastic. They are a non-profit company that really takes care of those who dance with them,” Clark said.

After he experienced some medical issues, CCB held a fundraiser to pay Clark’s medical bills.

Instead of gathering around the living room for this weekend’s bedtime story, come celebrate the magic of this beloved fairytale with CCB.

Music and Performing Arts Beat Reporter Peyton Garcia can be reached at entertainment@collegian.com.