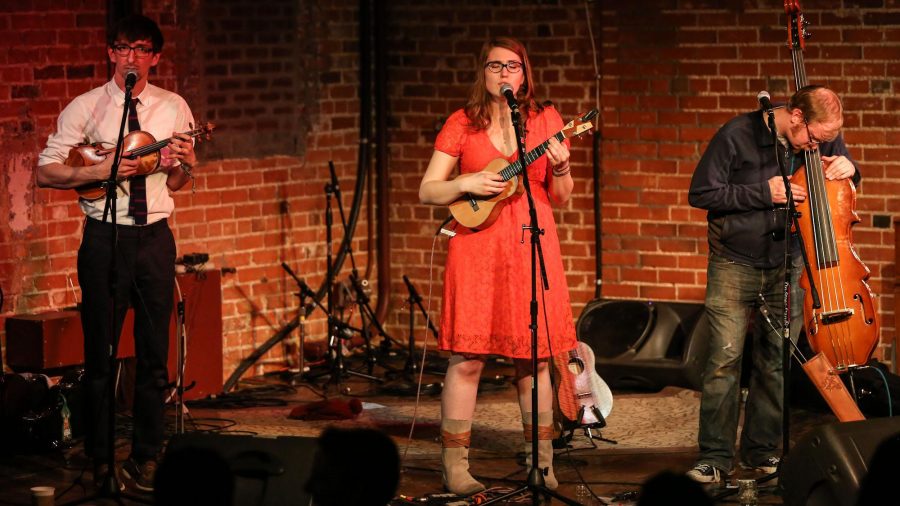 Standing in the Astoria bar, you would have never guessed that all attention from the audience was drawn toward only a man and his guitar Friday night at local music festival, FoCoMX.

Maxwell Hughes, a singer-songwriter who also toured with The Lumineers, hails from Fort Collins.

Standing in the audience was a CSU art major, Sarah Bendix.

“He used to be my babysitter,” Bendix said. “He’s blossomed into a great artist, but I don’t need no babysitter anymore.”

This local and FoCo native feel permeated throughout the entire weekend of the fifth annual FoCoMX where 240 bands played at 24 venues for two days.

At Crankenstein — A Boy and His Kite, an indie/rock band — played a set to a half seated audience while gray-haired attendees joined in chugging beer with the younger crowd.

The Lyric, a movie theatre turned venue for the night, held a funk R&B band that could have been straight out of the seventies.

There were 15 musicians crowded at the front of the theatre dressed in ‘fros and a leopard coat that could be only described as “pimp” while ThunderCats, an eighties cartoon, played in the background.

Audience member and mom of a band member in The Echo Chamber, Carol Thompson, has gone to FoCoMX every year since the beginning.

“We just love music,” Thompson said. “I thought (The Other Black) was entertaining and energetic. There were so many very talented people.”

For Tayke One, member and rapper of the band, the experience was new and exciting.

“I’ve never been a part of a music festival like this, and it’s so cool how all the local businesses and community get involved too,” One said.

Audience members included an older population sporting newsboy hats along with an appearance from WhiteCatPink, a pop Fort Collins band fully costumed in his cat suit.

Mama Lenny and the Remedy, Fierce Bad Rabbit and Dead Floyd closed out the rest of the night, bringing big crowds.

The group consists of five members, switching vocals and guitars between three of the musicans as a rowdy audience sang along to The Strokes songs.

“We thought it was a success on all levels,” Greta Cornett co-founder of FoCoMX said. “It was more manageable this year, but there were still lots of crowds enjoying the local music scene.”

Attendance was around 5,000 people, a number that is on par with other years according to Cornett.

Cornett also played in three bands including Mama Lenny and the Remedy.

“I had such a great time performing. When you put in all the leg work and get caught up in the backside of it all and the business part, when you get on stage you remember why you do it in the first place,” Cornett said.