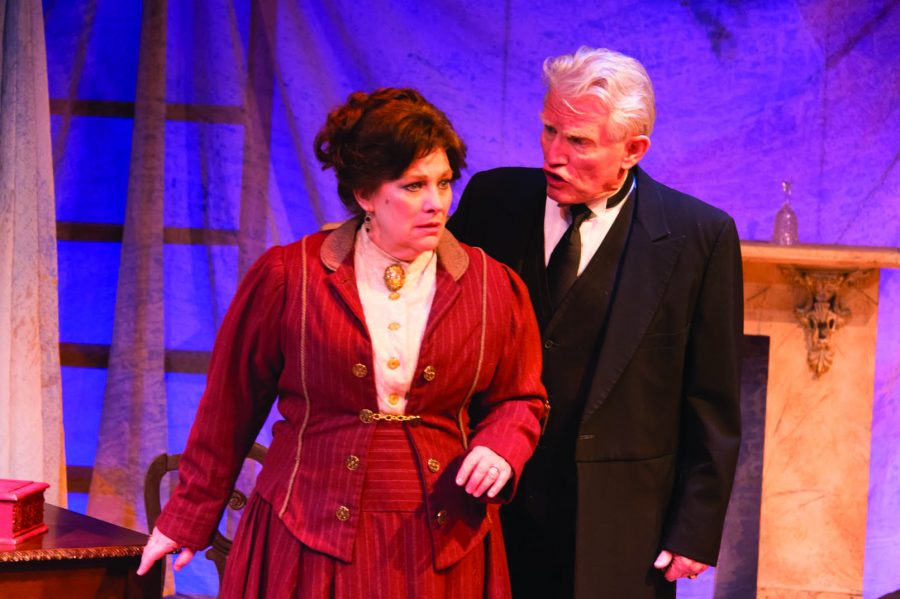 Scandal is the name of the game in “Ghosts,” a classic play written by Henrik Ibsen that caused a riot when first introduced to the world in 1881 and confronts issues that are still relevant today.

The play revolves around a widow, Mrs. Alving, who has hidden the truth about her toxic marriage from the world, even sending her son, Osvald, away at a young age to keep him from discovering the truth about his father.

However, when the now grown son returns for the dedication of an orphanage to his father’s memory, things quickly fall apart.

Today’s media and entertainment is rife with sex, infidelity and broken families, but these things were the height of controversy in the 19th century.
What: Ghosts

When: April 4 through May 5

Where: Bas Bleu Theatre, 401 Pine St.
“Everything in the play really has to be put into context. When things like that happened in the Victorian Era, people did not speak of them. You did not air your dirty laundry,” said Laura Jones, director of the Bas Bleu production of “Ghosts.”

While some of the subjects confronted in the play might not elicit the same degree of horror from a 21st century audience as they did from the play’s original audience, the intricate web of human emotion is still just as striking.

According to Jones, the range of emotion that must be felt and portrayed throughout the play is one thing that sets it apart.

“These characters are playing a nurturing supportive role one minute, then the next minute they’re playing despair and betrayal,” Jones said. “The play deals with almost Shakespearean emotions but puts them in a modern context, if you accept that modernism started at the turn of the century.”

These emotions and the action of the play are pulled forward by the constant undercurrent of subtext. Extracting this subtext from the script was an important piece of developing the characters of the play.

“A lot of the time what is being said is not what is meant, so what you are saying really isn’t as important as how you say it,” said James Burns, who plays Osvald.

Keeping all this subtext and emotion in check, so that the play didn’t turn into a parody of itself, akin to Mel Brooks’ “Young Frankenstein,” was something Jones said she put a lot of effort into.

“The process was about learning when to stop and say that’s just enough to make a point without falling over into the chasm of melodrama,” Jones said.

Many people have read or heard about “Ghosts” because it is considered a very historically significant piece of work, many people are also probably skeptical as to how a play written over 100 years ago might relate to their lives.

“The great part about this play is it’s about people trying to figure out who they are,” said David Austin-Groen, who plays the supposed father of Mrs. Alving’s house maid.

Grappling with identity and discovering oneself is something that many people can relate to, and is often seen as an integral part of the human experience. Other timeless themes and conflicts punctuate the play as well.

“The main message is that no matter what you do you can’t escape truth,” Burns said. “Even if you are trying to protect someone, hiding the truth will do more damage in the long run.”