Skeletons discovered to be more common than previously believed 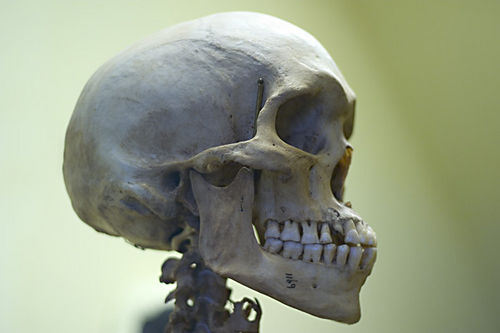 Based on the 3/8 RamTalk: “You want to know some crazy sh*t? Everybody has a skeleton inside of them.”

For years, it has been widely accepted that skeletons were first designed and invented by pirates long ago so that their flags wouldn’t be solid black, as they wouldn’t have matched the brown decks. The skeleton created a nice, aesthetically pleasing balance of colors on the pirate flag. However, new findings challenge that notion.

In a recent experiment conducted by the College of Health and Human Sciences here at CSU, it has been discovered that there is actually a skeleton inside most, if not all, people. They apparently have more use than sitting in a high school science classroom and aiding teachers in their awful jokes. Scientists are simply befuddled.

“I can’t believe people are actually buying this,” Dr. Pork said. “How can you get a skeleton into a person? You can’t. Case closed. There are no holes big enough. I’ve checked.”

Students, however, are more accepting of the findings. CSU junior Kile Lenayne is willing to consider the idea.

“Yeah, I could see it,” Lenayne said. “I bet that’s why x-rays look a lot like skeletons. Maybe the skeletons just grow with us, or something. Hey, do you think that’s what bones are made of?”

Although more research needs to be done to either confirm or disprove the study put forth by the CSU scientists, one thing remains clear: the fact that there is a skeleton inside of everyone is some crazy sh*t. Just think about it.