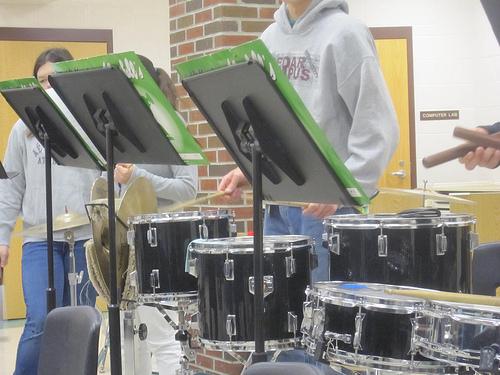 Drums and choirs seem like they’d have nothing in common, but Theater and Dance Assistant Professor James David said, “By my way of thinking, singing and drums are the oldest forms of music. It’s almost a primal sound, and very dramatic.”

This Friday, March 1 at 7:30 p.m. the CSU Chamber and Concert choirs will be performing in Griffin Concert Hall. Tickets are $7 for student, and it’s recommended you purchase tickets ahead of time at www.CSUArtsTickets.com to avoid a fee at the door.

“This is a wonderful opportunity to hear choral music written by current leaders in the American choral music,” noted James Kim, director of choral activities at CSU, “along with up and coming young composers who are just making their mark upon the choral world.”

The text comes from Kubla Khan, according to David.

“It’s wonderful to hear music (I’ve written) played for the first time, to hear the colors come together,” he said.

One of the performers, music major Matt Carroll, said, “This combination doesn’t happen all that much. It’s cool to hear and balance out.” He explained, “There’s a wide range of instruments, including melodic, and there’s drums.”

Another performer, music education major Spencer Poston, said the cool thing is, “the energy involved; it’s very physical … There’s a lot of aggression, like it requires it, it’s naturally aggressive.”

This concert is the last one before the Chamber Choir goes to Texas for special performances in Houston, San Antonio and Dallas, as well as some classes and clinics with high schools and universities.

“Music is anytime humans use sound for aesthetic purpose, from very noisy to a symphony,” said David. “We like to encourage our students to explore.”