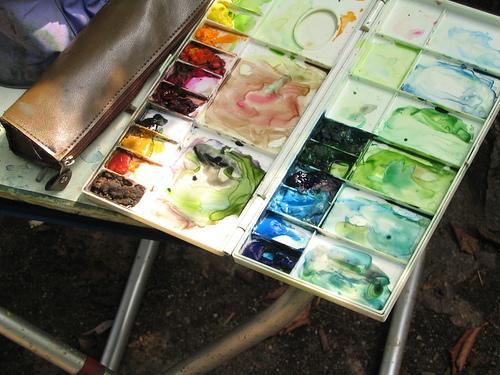 It often seems the world operates purely in cycles. Every living thing is a part of the massive turning wheel that is the circle of life. Yet, human beings have managed to divide most of their lives into neat little boxes with rules, boundaries, schedules, and even terms like “thinking out of the box.”

This daunting paradox plays heavily into the Box Squared Exhibition currently displayed at the Center for Fine Art Photography. Daunting as the paradox may be, some pieces are rather playful.

Thomas Ladd’s photograph titled Serving Tray is one such piece.

“I was very interested in the idea of creating a somewhat mystical photograph,” said Ladd. “I played a lot with the idea of hybrid animals and how I might make myself into a hybrid animal.”

Ladd combined components of what might usually be considered very separate boxes in order to create something new, but still coherent. This was an idea he conceived partially because of an article he read that explored how words might be extracted from photographs to produce stories.

“I wanted to see what would happen if you brought different elements together to create little kind of performances,” said Ladd.

Heidi Kirkpatrick is another artist featured in the exhibit. Her piece For Fredrick features a film positive of a hand layered over a page from Gray’s Anatomy mounted inside of a small tin box.

Like Ladd’s piece, For Fredrick obviously plays into the box theme of the exhibit; however, while Ladd described his time in the studio creating this particular photograph as “a lot of fun and very playful,” Kirkpatrick’s creative process was a bit darker.

Kirkpatrick said that combing through Gray’s Anatomy and using it in her art has helped her work through some serious physical pain.

There will be a public reception with an artist meet and greet Feb. 1 in the main gallery of the Center. The reception is set to start at 6:00 p.m. and will continue until 9:00 p.m.

Attendees will not only be able to enjoy the art and contemplate how boxes might interact, contradict and otherwise play into day to day life, but they will also have the chance to talk with some of the artists in the exhibit.