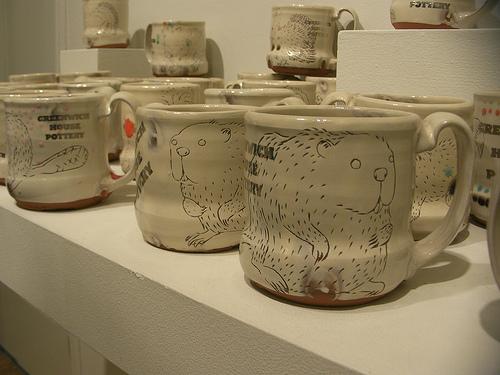 Cutting edge meets weathered tradition in the art of Andy Brayman, currently on display in the Hatton Gallery of the University Center for the Arts.

Brayman uses his hands along with some of the newest technology in order to create his own unique brand of pottery.

As pottery professor Sanam Emami explained, his designs start off in a computer and come to life through the use of 3D fabrication tools, with some help from the more traditional method of using his own two hands.

“What makes Andy different is that he is an artist trained with a ceramics background, but he uses a lot of 3D and digital fabrication tools,” said Emami. “So he is using traditional material, clay, but new technology to fabricate forms and patterns.”

To create the pieces on display at the Hatton Gallery until March 8, Brayman used drawings done by a computer program based on data from the natural world, such as light, temperature, humidity and wind speed.

This data was converted into abstracted geometries, which Brayman then incorporated into clay.

“Borrowing from ceramic history, Brayman truly reinvents these objects through the manipulation of form, incredible design, craftsmanship and strong conceptual content,” says the website of Harvey/Meadows Gallery Inc, where Brayman’s work has been on display. “Decals, slip casting and other manufacturing processes typically associated with industry are his primary methods of fabrication.”

Not only does Brayman defy the boundaries of old and new, he blurs other lines as well. In fact, blurring lines might be considered his signature move.

“He’s an artist, but his work definitely references aspects of craft and design as well,” said Emami.

The combination of art, craft and design, in addition to the blurring of modern and traditional all takes place in Kansas City at The Matter Factory, which is something of a hybrid combination itself.

When Brayman founded the Matter Factory in 2005, he pieced together aspects of an artist’s studio, laboratory and factory. Obviously, Brayman channels innovation into everything he does, but a playful element also comes out in his work.

“Of all the pots that I make, I am most pleased with the ones that are cunning,” said Brayman. “They contain a sort of playful deception that is not always visible straightaway.”

Brayman also strongly believes in function and utility, which, in addition to his materials, forms the traditional base from which his art is created.

He explained that function provided him with the basic forms of his pieces, and modern technology is what provided the specifics.

In Brayman’s art, nature and computers, the new and the old, function and cunning all converge in a display of how boundaries may be crossed and lines can be blurred.

“At their very best, the posts demonstrate an object’s potential to be both beautiful and cerebral,” said Brayman.