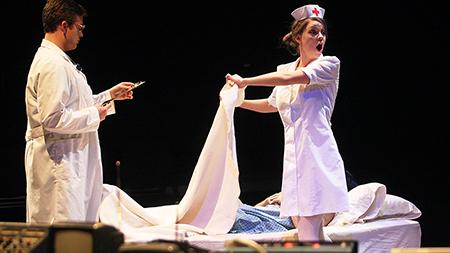 Emma Schenkenberger, who plays the role of "actoid" Jacie Tripplethree, uses her newly learned comedic move "the double take" during rehearsal for the UCA's performance of "Comic Potential." The play starts showing January 31st at the UCA.

In the newest production from the CSU theater department, the actors won’t be the only thing you’ll be watching.

“Comic Potential”, a romantic sci-fi comedy, is being performed “in the round” — a staging technique where the stage is in the center of the room with the audience surrounding it.

Senior theatre major Tim Garrity calls it a challenge preparing on a stage that is dependent on the audience, but finds the overall experience enjoyable. Garrity plays Chandler Tate, a bitter television director who survives on sarcasm and Jack Daniels.

“I trust that I was put in the right place; it’s a very natural way to act,” Garrity said.

Junior theater major Mac Trowbridge agreed,  adding that acting in such a way puts more pressure on the actor to be in character at all times.

“At one aspect it’s very exciting, but it’s also very nerve racking because the audience will see you breathe and hear you just standing there, but I think it will be challenging to project yourself in a 360 manner,” Trainsmith, played by Trowbridge, said.

“In the round gives incredible intimacy. Actors are not having to play out artificially to the front,” said director, Dr. Eric Prince.

Sophomore business major Emma Schenkenberger plays Jacie Tripplethree, an actoid — a low budget android that has replaced actors in this futuristic society — with what appears to be a fault: she can laugh.

Faced with this dilemma, the crew allows young up-and-coming writer, Adam Trainsmith, to use Jacie for a comedy he is working on. More and more, Adam falls in love with this “fault” of hers.

“She changes so much. In the beginning she’s just a robot. Adam treats her like a real person, and once she sees that she can be treated that way she sees that she has the potential to create her own person,” Schenkenberger said. “It’s a product of her environment and who she’s around. She’s very strong and creative in herself.”

Trainsmith, played by junior theater major Mac Trowbridge, causes an uproar when he runs off with Jacie.

“Throughout the play Adam has more confidence and tends to speak his mind and put his foot down to stand up for himself which is different from myself,” Trowbridge said. “It’s been enlightening to play this character and very beneficial for myself, personally.”

Schenkenberger said she enjoyed portraying an android because of its versatility in presenting the character. She added that being thought of as just a “tin can” by some characters gave her a very real sense of anger.

““It is pushing the limits of defining a human,” Schenkenberger said.

Dr. Prince is close to Ayckbourn’s work, having been an associate of the playwright’s theater in Scarborough, England. Two of Prince’s plays have been produced in Ayckbourn’s theater.

According to Dr. Prince, the key to this performance is the audience’s reactions to both the actors on stage and to each other. However, he says that the play also explores questions of future attitudes toward technology.

“Technology is always going to surprise us in ways we can’t imagine, but at the end of the day a computer will never be a human being,” Prince said.

“(Ayckbourn) does have a (liking) for science fiction situations and uses that fantasy element, but at the end there is a serious message: will we one day put machines (in) control our lives?”

CSU students have the opportunity to get a free ticket to tonight’s performance. These free tickets are on a first come, first serve basis. These tickets are also available for next Thursday’s showing and for any Thursday theater performances.